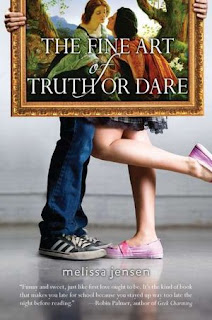 Rowena’s review of The Fine Art of Truth or Dare by Melissa Jensen.

“Pretty in Pink” meets “Anna and the French Kiss” in this charming romantic comedy. Ella is nearly invisible at the Willing School, and that’s just fine by her. She’s got her friends – the fabulous Frankie and their sweet cohort Sadie. She’s got her art – and her idol, the unappreciated 19th-century painter Edward Willing. Still, it’s hard being a nobody and having a crush on the biggest somebody in the school: Alex Bainbridge. Especially when he is your French tutor, and lessons have started becoming, well, certainly more interesting than French ever has been before. But can the invisible girl actually end up with a happily ever after with the golden boy, when no one even knows they’re dating? And is Ella going to dare to be that girl?

I’ve been itching to read this book for quite some time now and when I finally made the time to read it, I wasn’t as wowed as I thought I was going to be. That bummed me out some but still, this book had its moments.

Ella isn’t popular at school but she has friends and that’s good enough for her. She has a thing for Edward Willing, the dead painter but she’s also got a thing for the most popular guy at school, Alex Bainbridge. He doesn’t know she’s alive until she picks up one of his textbooks and gives it back to him.

He’s dating the queen bee at school and she’s not real friendly. Ella used to be known as Freddie Kruger because of a burn scar that takes up her upper torso on her body and when Alex calls her Freddie (thinking that was her name), Ella knows that her crush isn’t and probably won’t ever be returned.

That should have been that but Ella is close to failing French and her French teacher has assigned her a tutor who just so happens to be, Alex freaking Bainbridge. Ella’s not at all happy about it because she just knows that Alex wouldn’t want to do it but when he is serious about tutoring her, she gives in and lets him tutor her.

As their tutoring sessions start and they get closer and closer, Ella realizes that maybe Alex does want to be with her…but them coming together isn’t without a whole lot of drama. Ella’s friends aren’t fans of Alex and Alex wants to keep things between them a secret from everyone else. What else is Ella supposed to think when Alex doesn’t want anyone to know about them? If he would have explained his reasons for wanting this to happen, I think it would have done wonders to calming Ella down but because he didn’t, I didn’t blame her for thinking the way that she did.

The relationship that blossomed between Alex and Ella wasn’t filled with fireworks and what not, it was one of those relationships that just works. They were good together and I got the feeling that Alex was a lot more into Ella than she thought. Her insecurities that stemmed from her burns was prevalent in their relationship and while she flipped out and every little thing, I understood it and wasn’t as annoyed as I probably would have been with anyone else. What I enjoyed more than anything in this book was the friendship between Ella and Frankie. I loved that he was the complete opposite of Ella, in that he was confident in himself and in his friends. He loved Ella and accepted her the way that she was. To have her keep her relationship with Alex a secret from him, hurt him and I loved that even then, he was a good friend to her.

The whole talking to Edward Willing threw me for a loop because I just didn’t see why she did it. I thought it was weird and didn’t see why there was a need for her to do it since I didn’t think it added anything to the storyline. Aside from that, this was a pretty decent read. It’s a good choice for the beach and Alex Bainbridge is just swoonworthy enough to keep this book interesting.

3 responses to “Review: The Fine Art of Truth or Dare by Melissa Jensen.”