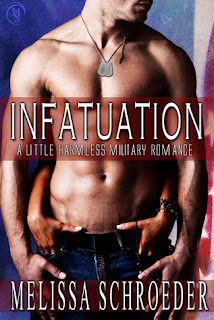 Francis McKade is a man in lust. He’s had a crush on his best friend’s little sister for years but he has never acted on it. Besides that fact that she’s Malachi’s sister, he’s a Seal and he learned his lesson with his ex-fiancé. Women do not like being left alone for long months at a time. Still, at a wedding in Hawaii anything can happen—and does. Unfortunately, after the best night of his life, he and Mal are called away to one of their most dangerous missions.

Shannon is blown over by Kade. She’s always had a crush on him and after their night together, it starts to feel a little like love. But, after the mission, Kade never calls or writes and she starts to wonder if it was all a dream. Until one night, her brother Mal drags him into her bar and grill and Shannon gets the shock of her life.

Kade isn’t the man Shannon knew in Hawaii, or even the last few years. Losing a friend and being injured changes a man, especially one who had never felt so vulnerable. He still can’t shake the terror that keeps him up at night. Worse, he is realizing that the career he loves just might be over.

Shannon is still mad, but she can’t help but hurt for the man she loves. He is darker, a bit more dangerous, but beneath that, he is the Kade she’s known for so many years. When he pushes her to her limits in the bedroom, Shannon refuses to back down. One way or another, this military man is going to learn there is no walking away from love—not while she still has breath in her body.

The end of America’s involvement in Iraq may now be at hand, but there will not be any end to the stories that will come out of our military involvement in the Middle East any time soon. And it’s a good thing, as I see it. The men and women who have been deployed overseas are people with relationships that will often be plundered and plowed under because of separation, long-term PTSD illnesses, physically debilitating injuries and more. I applaud authors who are willing to write accurately about the crap that war really is and this particular author has taken on a number of issues that are specifically influential when it comes to human romantic involvement. This story is a fine case in point. The publisher’s blurb is quite extensive so suffice it to say that this is a romance that Kade had desired for years. And his best friend’s sister, Shannon, had been just as taken with Kade as he was with her. So the only breaking news here is that they took the opportunity that was given them and, as the saying goes, “made hay while the sun shone.”

Along with the intense romance that forms the core of this story are the very graphic scenes involving the considerable change in Kade when he returns from their “mission.” Shannon’s brother was equally overwhelmed and saddened by the loss of one of their team’s best, but somehow the death of a team member coupled with his physical injury had been more than Kade could handle, especially when there was the distinct possibility that his career as a special-ops team member was over. In its own way this story is a commentary on the damage that war brings, one the inhumane character of war and its selection of its victims–uncaring about anything or anyone who gets chewed up and destroyed.

I was especially taken with Shannon, a woman of color who was a business whiz, a woman who knew her own needs and was willing to act on them, a woman who understood and accepted who she was and who lived comfortably in her own skin. She was not one to care much about Kade’s pale skin. It was the man she loved. Kade, too, found Shannon burnished exterior to be gorgeous, and while society may still have knee-jerk reactions to interracial relationships and marriage, these two didn’t give a fig for what society cared about.

This is a really great read and it comes with a book cover that will hold many in thrall, to be sure. Mixed with humor and heat, this story carries the reader from Hawaii’s beaches to the energy and pulse of New Orleans. And through it all runs that sense that in spite of the dark and miserable penchant human beings have to destroy one another runs the sure and certain truth that human love will survive. This is a book that romance lovers won’t want to miss and won’t be able to put down once they begin reading. My kind of book!!

This book is available from Melissa Schroeder Publishing. You can buy it here or here in e-format.