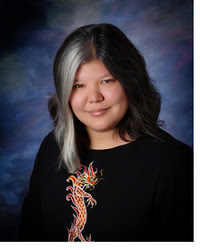 I’m super thrilled to have Julie Kagawa stop by The Book Scoop today to chat with us over here. She’s written four books that I have thoroughly enjoyed reading over the course of the last couple of years and I’m doing my happy dance over here because she’s here on my blog.

*squeealll*
Please help me give Julie Kagawa a warm welcome to The Book Scoop! And now on with the questions…

1. Is there something you would like to say to your readers?

Thank you from the bottom of my heart. Authors are nothing without readers, and I’m forever grateful to you for giving my books a chance. =)

2. As I was reading The Iron Queen I had to stop and grab tissues several times, when you were writing it did you find yourself getting overly emotional?

Bwahaha, your tears feed my Muse! Ahem…I mean, no, not in The Iron Queen at least. I knew what was going to happen, and I’m the type that likes Ultimate Noble Sacrifice endings. I did, however, get a little emotional while writing The Iron Daughter, when a certain character I won’t name died. I’d grown quite attached to him, and I shed a couple tears when his inevitable end finally came. Rest in peace, big guy, you will be missed.

3. Being that the Iron Knight is written from Ash’s point of view, was it easier or harder to switch over and tell his story?

It was a little harder, initially. I knew Meghan; after three books I knew her voice and her personality and her quirks. It was difficult with Ash, because he was such a guarded character, and he never was really chatty. And because he’s lived such a long time, and is an Unseelie fey, he’s done some things in his life that might change how some people view him. It was actually kind of scary putting his story out there; what will people think now that they know the real Ash? But I wrote his story as honestly as I could, and I hope they will come to love the Winter Prince as much as I do.

Thanks so much to Julie Kagawa for stopping by. I, personally think she did an amazing job with Ash’s character and I didn’t think it was possible for me to love him anymore than I did at the end of The Iron Queen but in The Iron Knight, I did. If you haven’t read this book then you need to fix that because, it’s good stuff. Fans of this series will enjoy it and fans of Ash will be thrilled.

Go out and read it, you won’t be sorry!

Review: The Fragile Ordinary by Samantha

Review: If There’s No Tomorrow by