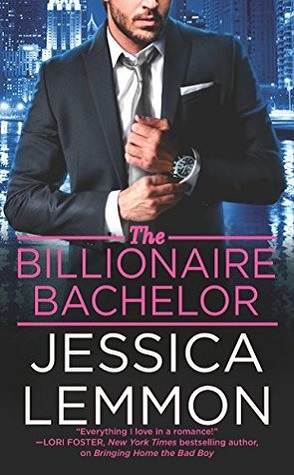 Manwhore. That's what the board of directors-and the tabloids-thinks of billionaire bachelor Reese Crane. Ordinarily he couldn't care less, but his playboy past is preventing the board from naming him CEO of Crane Hotels. Nothing-and no one-will keep him from his life's legacy. They want a settled man to lead the company? Then that's exactly what he'll give them.

Merina Van Heusen will do anything to get her parents' funky boutique hotel back-even marry cold-as-ice-but-sexy-as-hell Reese Crane. It's a simple business contract-six months of marriage, absolute secrecy, and the Van Heusen is all hers again. But when sparks fly between them, their passion quickly moves from the boardroom to the bedroom. And soon Merina is living her worst nightmare: falling in love with her husband . . .

This is the first book by Jessica Lemmon that I’ve read and it definitely won’t be the last. I really enjoyed the romance between Reese and Merina. I loved how their story started, how their romance blossomed and I was super happy with the way that it ended. It wasn’t the perfect romance and I really liked that it wasn’t. The main couple had lots to work through and I liked the way that Lemmon brought these two people together.

Merina walks into the hotel that has been in her family for as long as she can remember one morning to find out that her parents sold her legacy and they sold it to the freaking Cranes, those money hungry soul suckers who won’t take care of her hotel the same way that she would. She’s so steaming mad that she rushes into Resse Crane’s office and gives him a piece of her mind.

Reese’s father is retiring soon and he needs to come up with a way to make the board of directors for his family’s company see that he’s more than the playboy the media paints him to be. They need to see that he’s serious about his legacy and he’ll do whatever it takes to make sure that the running of the company stays in the family. When Merina Van Heusen storms into his office, wanting to tell him where he can shove his money and lets him know that she won’t rest until she finds a way to get her family hotel back, the wheels start turning in Reese’s head and before he knows what’s what, he’s proposing to Merina and offering her hotel as incentive to play his wife for six months until the Board votes him into the CEO position.

Their marriage was supposed to be in name only but when two people have explosive chemistry and an attraction that threatens to drown them both, things are going to go down.

Reese and Merina get down and they keep getting down. Spending so much time together, playing the perfect couple starts feeling more and more real and they longer they play the role, the more invested they become in each other.

I loved the romance between Reese and Merina. I thought they were great together and I really enjoyed seeing them get to know each other and fall slowly in love. Reese frustrated me with how long he held out where Merina was concerned but I loved that Merina was no one’s bitch. I loved how she didn’t let hurt feelings and misunderstandings get in the way of what she wanted and what Reese needed. She was a great heroine and I’m so glad that Reese ended up being the man she deserved.

This was a great book that I enjoyed from the beginning to end. There were times when I wanted to kick Reese in the balls but in the end, I was so happy for the both of them that I forgave him. I’m so looking forward to the next book and I’m hoping that we’ll meet the elusive Eli Crane in that book. I want to know all of Reese’s brothers.

I’ve read good things about Jessica Lemmon’s writing and I’m glad that the high praise lived up to my expectations. I will definitely be reading more from this author because I was invested in these characters. She wrote a fantastic contemporary romance with two passionate characters that come together in love and I really dug it. I’m so looking forward to Tag.

Review: The Bastard Billionaire by Jessi

Review: The Billionaire Next Door by Jes

One response to “Review: The Billionaire Bachelor by Jessica Lemmon”