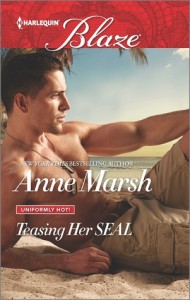 Objective: Stay on mission. And out of her bed.

Surgeon Laney Parker is on her honeymoon. Alone. Without her cheating fiancé, she's enjoying her nonrefundable "vacation" at Fantasy Island, an exotic resort filled with lush greenery, white beaches and staff who apparently grant every sexual request. Including an unbearably hot massage therapist whose touch turns Laney to molten lava…

It’s been a long time since I have read an Anne Marsh novel and now I don’t know why I haven’t been enjoying her books right along.  Reading this first book in a new trilogy has been a reminder that I have always enjoyed her books, her stories which seem crafted right out of real life, her characters that are gritty and edgy, and the way her stories develop unexpectedly.  Teasing Her SEAL is a great start to a new series that will feature three men of SEAL Team Sigma, whose specialties have been honed in out of the way places for years.  Most of the guys have been together for years, yet even the newer members of the team are all committed to being ready at a moment’s notice to put their talents and experience at the disposal of their government.  All of them have watched SEAL relationships tank and several have themselves learned the hard way that being gone for weeks or months at a time is too hard a burden to bear for some relationships.  So Gray Jackson has come to believe and he is OK with that.  That is, until he meets Laney Parker, a gritty, mouthy, I-know-what-I-am-doing, take charge trauma surgeon who doesn’t sugar coat anything, but who also has a few things to learn about herself and how to give in when she butts up against Gray and his take-charge ways.

This is, for all intent and purpose, a love story about a vacation fling that somehow goes awry.  But that’s the nature of romance, isn’t it?  Somehow these two begin to really listen to each other, really begin to understand that they each provide something the other needs.  Yet there is the barrier of secrets that Gray cannot divulge and no matter what kind of future they may or may not envision, getting past that barrier is going to be tough.

Ms Marsh has introduced readers to her SEAL Team Sigma guys and their evident trust in each other, their commitment to one another and to the tasks they believe in come through loud and clear.  They tease and teach, advise and correct, commiserate and keep each other’s secrets, but in the end, they want their brothers in arms to be good within themselves.  Laney is an interesting character in that she is a woman who has dared to dream of some semblance of normalcy in her emotional life by becoming engaged to an older doctor she respected and came to love.  She was angry and hurt to discover that he felt that being with any nurse or another woman of his choice was kind of his right.  He really couldn’t understand why she was so upset.  To lose her job the same day was an additional blow.  So gifting herself with this resort vacation, even though she was alone, seemed like something she had earned.  Making a couple of new girlfriends on the island was icing on the cake as friends were not an aspect of social life she had allowed herself with her education and medical practice pressures.  All in all, this is a delightful love story and a credit to Ms Marsh, a worthy addition to her writing resume.

And, once again, I have to congratulate Harlequin Blaze and the editors for putting out a quality product, well edited, good grammar, correct spelling.  A joy to read by someone like me that enjoys the use of good language in and of itself.  So latch on to this one.  It’s a terrific read, and a great lead in to the rest of the trilogy.