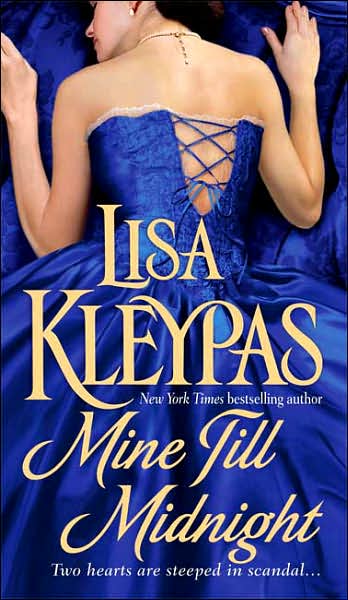 When an unexpected inheritance elevates her family to the ranks of the aristocracy, Amelia Hathaway discovers that tending to her younger sisters and wayward brother was easy compared to navigating the intricacies of the ton. Even more challenging: the attraction she feels for the tall, dark, and dangerously handsome Cam Rohan.
Wealthy beyond most men’s dreams, Cam has tired of society’s petty restrictions and longs to return to his “uncivilized” Gypsy roots. When the delectable Amelia appeals to him for help, he intends to offer only friendship—but intentions are no match for the desire that blindsides them both. But can a man who spurns tradition be tempted into that most time-honored arrangement: marriage? Life in London society is about to get a whole lot hotter….
I luuuuuurve Lisa Kleypas. It never matters if I’m not in a “historical mood”. I can pick up a Kleypas book and be engrossed in it from Page 1. Mine Till Midnight was no exception for me. I loved it. It also made me very happy that Cam didn’t end up with Daisy in the last Wallflowers book.

Amelia has been the caretaker in her family for years and years and years. As a matter of fact, Amelia is so old that she practically has one foot in the grave. She’s perfectly fine w/ being a spinster. Her mission in life is to see her sisters happily married off and her brother, well, alive. How old is Amelia you ask? She is a whopping 22 years old. Yep. Ancient. By this short paragraph, you probably have already picked up on the fact that Amelia is a martyr. Not in a bad way, though. Amelia loves her family and will do anything to protect them. That’s what is so great about Cam and Amelia together. Cam shoulders some of the burden that Amelia has held on her old-ass shoulders.

Only a few months earlier, Amelia’s brother (Leo) became Lord Ramsay. A total unexpected ascent to the peerage left Amelia’s family unprepared to handle what came with the title. Quite suddenly Amelia finds that Leo is drinking more than ever and gambling money away left and right. When she goes searching for him, she meets Cam Rohan, manager of Jenner’s. More accepting than most of the Gypsy culture, Amelia is fascinated by Cam but determined to forget about him after he helps locate her brother.

As always, that’s easier said than done. When Amelia and family move to the Ramsay country house, she finds that their “estate” borders Lord Westcliff’s. She soon finds that Cam is a good friend of Westcliff’s and is helpless to fight her attraction to him. I loved their second meeting. It was laugh out loud funny. Cam, Lord Westcliff, and an inventor friend were testing a rocket launcher when Amelia unknowingly steps in front of it. Cam, of course saves the day by tackling her. It was very entertaining.

As for Cam, he is torn between his new feelings for Amelia and his need to roam freely like a Gypsy. Determined to leave Jenner’s and find his tribe, Cam doesn’t count on his need to stay with Amelia. There is one thing the Gyspies believe and that is to hold onto ones mate, no matter what the consequences. It doesn’t take Cam long to realize that Amelia is the one for him and that to be with her, he’ll have to give up his dream of every being “free”. It was a little convenient how Cam so willingly (and quickly) gave up what he had dreamed about for so long.

Kleypas also put some Gypsy lore in the book. See Leo was betrothed to a girl who died when Scarlet Fever swept through the town they lived in. He was madly in love with her and refused to let her spirit “move on”. Eventually he had to let her spirit go or he would have followed her into some bad place where she couldn’t move on. I had no sympathy for the guy. I mean, really. I understood he lost someone, but he had four sisters. Four sisters that were counting on him to be the man of the family. Him drowning his sorrows away almost killed his sisters and Merripen (a sort of adoptive brother).

I really enjoyed seeing the relationship develop between Cam and Amelia. Cam really had to force Amelia to accept help in dealing with her family. He also had to make her realize that marriage to him would not be a bad thing. I really enjoyed reading the banter between these two characters. There were also some extremely amusing situations w/ Amelia’s eccentric family. She has a sister that steals things, but doesn’t remember. The same sister also has a lizard for a pet which she lets loose at the dinner table during a dinner party at Lord Westcliff’s house. She only did it to distract the table after Leo was making a fool of himself as well as angering Lord Westcliff. But it was soooo freaking funny.

7 responses to “Mine Till Midnight by Lisa Kleypas”