Tag: What Happens in Vegas 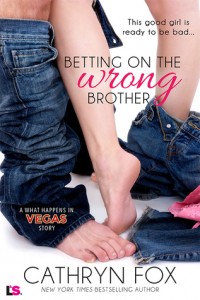 He may be at a romance readers’ convention, but a naked woman in the elevator is not what horror writer Ryan Wheeler expects. Now he can’t take his eyes off of her—and not just because he saw her naked, though her luscious curves certainly aren’t helping the matter. She’s beautiful, funny, snarky…and a complication he doesn’t need.

Running into her teen heartthrob while naked wasn’t exactly part of romance novelist Andi Palmer’s weekend plans. Worse, he doesn’t recognize her and gives her a fake name¬. Years ago, he shot her down in the worst possible way, and now this? It’s time for a little down-and-dirty revenge.

Ryan’s more than a little turned on by this good girl who wants to be bad. But things aren’t what they seem, and the secrets they’re keeping from one another might just end this sexy little rendezvous before it ever begins…

When Andi Palmer was younger she was overweight and had a crush on her brother’s friend Nolan. He thought she was a sweet girl and kind enough but she took his kindness as interest and made a move on him. Nolan was a bit of an ass back then and when she made her move he laughed at her.

When Andi gets stuck in an elevator with an all-grown-up Nolan she plots her revenge. She plans to come on to him again, get him all hot and bothered, and then leave him that way without following through. The problems are two-fold: Andi doesn’t have any idea that Nolan isn’t Nolan but actually his older brother Jack (who goes by the name Ryan); and she’s so attracted to the man so she can’t actually leave him hot and bothered when the time comes.

Ryan is incredibly attracted to Andi right from the start. He loves that she seems like a sweet girl… and she is, but with a bit of a bad girl thrown in there for good measure. He loves it when she shows up unexpectedly at his hotel room and the rest, as they say, is history. Unfortunately, Ryan figures out that Andi thinks he’s Nolan and doesn’t know how to tell her the truth about his identity nor what he truly does for a living. Andi finds herself falling for the man but once she finds out some truths about him she’s not sure she can get past the lies when she thought they might be headed for an HEA.

This was a very cute book. I liked Ryan and Andi together almost immediately and I loved that she was a good girl who had a bit of a bad side. I truly wish that Ryan would have come clean about who he was because as a writer herself, Andi would have understood his reasons for being incognito.

The romance was sweet and I enjoyed the story.