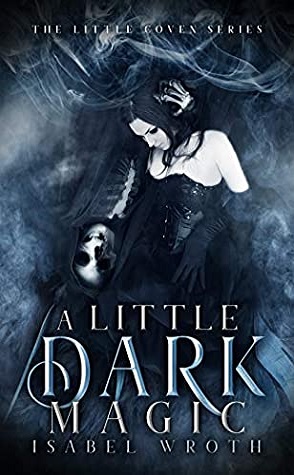 *Kill what you love the most, and know what it means to have unlimited power.*

Kerrigan Gray can't sleep without dreaming of the night she was forced to kill her mate. In her nightmares, she's drowning in his blood, choking on it. Now, after a decade of unsuccessfully trying to summon his spirit, Kerrigan sees Maksim standing across the street in broad daylight, smiling at her.It's impossible, and yet, there he is, big as life, his lips soundlessly shaping the word, Orpheus.

Maksim has lost count of the days he's spent waiting for the opportunity to escape. His sweet Bride has no reason to believe he's still alive, and Maksim dreams of the day when he can shake off his chains and return to her. As loathe as he is to admit it, he can't do it without help. He's been starved for too long and left to rot in the dungeon where he and Kerrigan both were betrayed.

The path Kerrigan must take to reunite with her beloved will be fraught with danger, and it will take more than A Little Dark Magic to defeat their enemies.
NO CheatingNO AbuseYES HEA

This book CAN be read as a standalone, but the author recommends that it be read as part of the series. Though this book is DARK, with copious amounts of blood, violence, and body parts, there is no violence or jealousy between the main characters.

For the sensitive reader, the author does disclose there is DISCUSSION about suicide and magical mental abuse.

A Little Dark Magic by Isabel Wroth is the second book in The Little Coven series and follows Kerrigan as she searches for the spirit of her lost vampire mate. I wasn’t sure what to expect from this book. The author’s note at the beginning tells us this is a darker story than the first in the series, and I found that to be true. I ended up enjoying it more, however, in part because of how kickass Kerrigan was.

Kerrigan was forced to kill her vampire mate, and for 12 long years she’s been trying to summon his spirit so she can ask for forgiveness. When one of her coven sisters tells her she can help Kerrigan find him, she jumps at the chance. Only what they find isn’t his spirit, but his undead body….

Maksim has been held and tortured by the same coven who forced Kerrigan to murder him, and Kerrigan is going to need all her considerable skill to save him. But saving his body isn’t the end, for it may have been one of his brothers who betrayed them to begin with.

Kerrigan spent 12 years learning and honing her craft. She isn’t just a Summoner, she’s also a Necromancer – among other things – and she’s the best at what she does. She’s also wily and smart, and she trusts no one but her coven sisters and Maks. I loved how everyone underestimated her, while she ran circles around them. She was confident in herself and her power without being arrogant, and I loved how she got shit done without taking herself too seriously.

I also enjoyed Maks and his devotion to her. I thought at first maybe what they had wasn’t real, but that wasn’t the case. He truly wanted her for his Bride, and every interaction they had was genuine and deep. His need to protect her never overrode her own abilities and I loved how confident he was in her. His pride in her power came through very well. Their romance was sweet.

I really enjoyed the coven as a whole and I hope she continues the series.