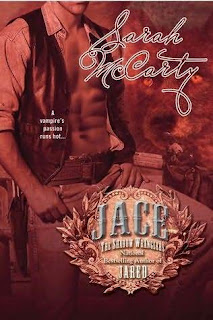 Vampire Jace Johnson was not a family man until he met Miri. But their forbidden relationship ended when she disappeared. After a year of searching, Jace finds Miri in a Sanctuary enclave.

After a year of cruel experimentation by the Sanctuary on her werewolf form, Miri is no longer the passionate wife Jace remembers. She only lives to rescue the daughter Jace never knew they had.

Now, they must overcome the tragedy of their pasts if they are to reclaim the future they both desire.

This paranormal romance is the third in the Shadow Wranglers series, and as I had not read the first two novels in this series, I floundered just a bit making connections with characters and situations that were carry-overs from the previous stories. Yet in the truest sense of the word, this is a stand alone story and I didn’t have a massive amount of difficulty figuring it all out. Being a Sarah McCarty fan from her Western historical romance, I was delighted to be given the opportunity to read another of her works. As I had found in her other writing, Jace is filled with sexual tension, relationships that are strained alongside those that are close and collegial. Add in the tension of a missing baby, the ever-present tension between wolf-shifters and vampires, rogue paranormals, mad scientists who are seeking to grab paranormal individuals for “lab rat” status, and you have a novel that is tense, edgy, erotic, sexy, and downright riveting. There is also the protracted issues between Jace and Miri–her year-long absence as a missing person has affected both of them: Jace, with his frustration at not being able to find his mate; and Miri, who had eventually given up hope that Jace would ever find her. Now they must find a way to deal with those inner wounds, with the self-protective mechanisms we all use when we don’t want to be hurt again, and the issues over a missing baby daughter–a daughter Jace didn’t even know existed. No easy love relationship here.

There were some characters that I would call “shadowy”–the shifter enforcers who functioned as a law unto themselves. I found myself wondering from time to time which side of right and wrong to which they gave their allegiance. Some of Jace’s vampire relatives were puzzling to understand. Obviously, each was somewhat of a “study” and as such, they each posed their own challenges for the reader. But isn’t that the mark of a good writer who knows how to create characters that pose different challenges for different readers?

My greatest surprise was the relationship Jace had with the shifter community. It would appear that he had “standing” with them because of Miri. But the entire portion of the story dealing with his relationship with them and their difficulties coming to peace with each other sat just a little uneasy with me. That being said, it was a unique approach to the traditional antipathy between these two paranormal communities, and after all, this is fiction, so a writer is certainly free to create any relationship with any community in any way each chooses. McCarty has done this in spades and it comes out just fine.

I found this book fascinating as well-written, well-edited, and put together by a writer that knows how to keep not only the details of a story straight but how to make the parts fit into the whole. Simply said, it is just one truly terrific, spectacular read. It is well worth the time and effort to read and a story that will satisfy the most avid paranormal romance lover.

This book is available from Berkley Trade. You can buy it here or here in e-format.