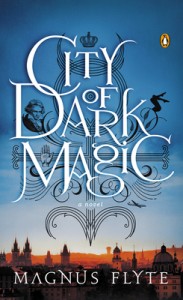 Cosmically fast-paced and wildly imaginative, this debut novel is a perfect potion of magic and suspense


Once a city of enormous wealth and culture, Prague was home to emperors, alchemists, astronomers, and, as it’s whispered, hell portals. When music student Sarah Weston lands a summer job at Prague Castle cataloging Beethoven’s manuscripts, she has no idea how dangerous her life is about to become. Prague is a threshold, Sarah is warned, and it is steeped in blood.
Soon after Sarah arrives, strange things begin to happen. She learns that her mentor, who was working at the castle, may not have committed suicide after all. Could his cryptic notes be warnings? As Sarah parses his clues about Beethoven’s “Immortal Beloved,” she manages to get arrested, to have tantric sex in a public fountain, and to discover a time-warping drug. She also catches the attention of a four-hundred-year-old dwarf, the handsome Prince Max, and a powerful U.S. senator with secrets she will do anything to hide.

I…honestly have no idea what to think about this book.  It was just so…strange.  Not always in a good way.

Though this book had some interesting concepts in it, none of them really came together well.  The plot had too many subplots, and instead of coming together, most of these just sort of…existed in the same space.  What did time travel and KGB agents have to do with each other?  Not a damn thing.  Seriously.  In fact, I’m not sure why the ‘time travel’ was included, other than for some fun descriptions.  Or, since it seems like it’ll be a series with more focus on the time travel plot, why the KGB agents?

Speaking of those KGB agents, the inclusion of the antagonists POV once again ruined all tension in the book.  The sections focusing on the academics had them trying to figure out who (what why where), but since we already knew because of the POV switches, there was no tension for us, no ‘reveal,’ and really very little to get us invested in this lack-of-a-mystery.

In fact, there was very little payoff for anything in this book.  There are things to figure out, but either they are left for the sequel, they’re given away too soon, or their just…sort of tepid.

And to add to that…why was there sex in this book?  It’s not that I’ve got anything against sex (clearly) but it’s just so random in here.  Sarah just occasionally gets super horny out of the blue and then they screw, and it’s soulless and pointless and (since it’s usually done in vague summary) really dull.  If the sex isn’t in there for character development, and if it’s not there to be salacious, what is it there for?  Speaking of a lack of character development, that wasn’t just with the sex, that was throughout the book.  Supposedly at the end Sarah and Max are in love and Sarah learns all these life lessons…which it’s a good thing she out and out told me because I wouldn’t have gotten that from the actual novel at all.

I did like a lot about this book, and it had some very fun concepts that it played around with.  The setting was vivid and the history was fascinating.  But it was too fractured to really make for a compelling read.

This title is available from Penguin Books.  You can purchase it here or here in e-format.