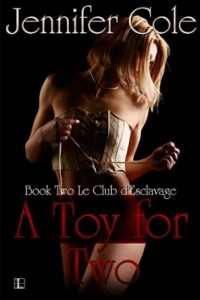 Will Megan play it safe, or follow her heart and become a toy for two?

Megan Washington is the perfect daughter…as long as she keeps her wild streak hidden. Only after a trip to the Le Club d’Esclavage does she give free reign to her sexually adventurous spirit.

Troy Simon and Ransom Seager need the ideal partner, and not just any submissive will do. Their third must match their passions and indulge in the roleplay both men find so arousing. With trust building and temperatures rising, will Megan’s powerful politician father destroy the growing bond between these three hearts?

Megan goes to Le Club d’Esclavage with 2 friends. She’d never been there before and knowing it’s a BDSM club she’s interested but still a little leery about what she might find inside. Walking into the club pretty much means that you have agreed to do…whatever goes on inside. Yikes! Talk about a scary prospect. But not long after arriving she sees Ransom and she sashays over to meet him and all of his fine gloriousness.Megan agrees to go with Ransom to a private room and that’s where the fun begins. There’s some tying up and there’s some extremely hot sex going on it that room…oh and there’s also Troy who has joined the party. With Troy and Simon trying to find a 3rd to their partnership they are thrilled with Megan, her natural submissiveness and her eagerness. Unfortunately Megan’s father is a Senator and he shows up to make sure Megan comes to heel.

This was a short, pleasurable read. The entire story takes place at the club, with the sexual antics of Troy, Megan and Ransom taking up most of the book. There was some conflict at the end of the story with Megan’s father but it was rapidly taken care of. I enjoyed reading about the trio getting together even though I’m not a fan of the “falling in love in 1 night” scenario. The author gave us enough of the characters personalities that you felt that even though they were claiming their love quickly that they would make it work in the end.