Hello there and Happy August!
I hope you’re all happy and comfy wherever you are. It’s hella hot here…and strangely humid so I’m staying indoors lately. Those of you who live in high humidity areas would probably not even notice the humidity here but since we’re not used to it at all it’s a bit weird.
So I’m boss-less now. Ok, not boss-less completely but kind of (we have someone who’ll be the priest-in-charge until we find a new permanent priest). My boss’s last day at work was last Thursday and her last service here at the church was yesterday. We had a beautiful service and a great shindig afterwards. There were lots of teary eyes but both happy and sad tears. We look like a couple of geeks in this picture but here we are at the party yesterday. 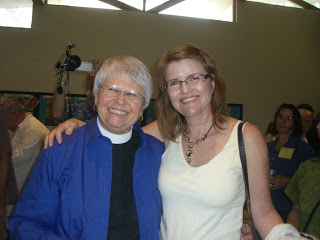 Other than that it was a quiet week. What was your week like?
My reading…

I started off the week with She’s Got Balls by Mia Watts. This was the story of 2 police officers who go undercover to crack a drug ring. One of the men has to dress like a woman because “she’s” supposed to have been on steroids. The story is pretty short but long enough to get in some great laughs, great sex and a cute love story. I liked the book and liked Watts’ writing as well. 4 out of 5

Next was The Amorous Education of Celia Seaton by Miranda Neville. This was the story of a woman who is kidnapped. She escapes but comes across a dandy that she knows from London who likened her at one time to a cauliflower. Since he was hit on the head and doesn’t remember who he is Celia decides to make up a story about who he is. She ends up falling in love with the man while they are on their travels to civilization but when he finds out who she is he’s none too pleased. Unfortunately he can’t seem to break himself away from her. The story also involved an erotic novel that the couple read from and role-played a bit. It was a cute story. 3.5 out of 5 Read for The Book Binge

My next read was The Chase by Erin McCarthy. This is book 4 in the Fast Track series and it was another good one. The book was about Evan who is a driver who’s having a bit of a bad season and Kendall who is the only woman on the circuit. The pair dated a decade earlier but broke up – much to Evan’s surprise. Now they’ve communicated and figured out what went wrong all that time ago and next thing you know they’re hot and heavy again. But what happens when a BIG surprise hits Evan what will he and Kendall do about it. This was a really fun, fast and easy read. I read it very quickly as I just kept turning pages. I really liked Kendall and Evan together and how they worked things out. Kendall did have a lot of insecurities that bothered me a bit but I thought they were handled well. Good book. 4 out of 5 Read for The Book Binge

I Love the Earl by Caroline Linden was a cute novella about a woman who grew up as a tradesman’s daughter and then suddenly becomes a Duke’s sister. She is shoved on the marriage market by her brother with a 40,000 pound dowry and told that she can make the decision on a husband all her own. When she meets a man who is destitute and not afraid to let her know she’s not all that nice to him. But she eventually comes to love him and wants to marry…but what will her brother do and say. This was very cute. The pair fell in love rather quickly but it was done well and was a sweet story. 3.5 out of 5 Read for The Book Binge

My Tracy’s TBR Challenge read for the week was Closer by Jo Leigh. This was about Christie, a woman who was being stalked. She had no idea who it was but she had lost her job because of the stalker, her friends and now her bank accounts had been taken over and this had been going on for about 5 months. She was afraid to leave her house. While looking at a photo of her and her brother who had died she finds a phone number on the back and calls for help. Boone shows up and says that he was a friend of her brothers – which he was. He does everything he can think of but the guy still has a bead on her and now wants Boone out of the picture. Boone had been half in love with Christie before he arrived to help. Nate, Christie’s brother, always talked about her and Boone felt like he already knew her. It wasn’t that much of a stretch to take their attraction for each other one step further. I liked the book and how it was written. There were no sex scenes at ridiculous, inappropriate times that happen so often in these kinds of stories. Boone and Christie were great together and I liked the end a lot (total plot twist that was unexpected). 3.75 out of 5

Shifting Sands was next on my list. These are 6 different m/m short stories by Jet Mykles, Kimberly Gardner, JL Langley, Willa Okati, Ally Blue and Brenda Bryce that are all related but each have their own HEA. It was definitely a good yet different approach…can I call it an anthology? The story is about Shifting Sands ranch and most of the guys who work there are gay. Daniel who owns the ranch gets married to Yi (though they’re not in love) but when she can’t get the guys on the ranch to sleep with her she calls them unnatural and curses them. After that during the full moon each month they shapeshift into different animals. The stories are about each of the 6 men and them finding their loves. I really liked the stories and thought it was a clever way to tell them all. 4 out of 5

Last on the list was Lord of the Vampires by Gena Showalter. This is book one in the 4 book Royal House of Shadows series. Each book will be written by a different author (this one releases 8/23) and this one introduces us to the basic plot behind the stories. This book was about the oldest son of the four children Nicolai and his love story. I will post my review on this one later in the month. 3.5 out of 5
My Book Binge reviews that posted last week:
Rough Cut: Vincent Diamond Collected by Vincent Diamond
Nightshade by Andrea Cremer
Since the Surrender by Julie Anne Long
Nightfall by Ellen Connor
Storm’s Heart by Thea Harrison
Happy Reading!