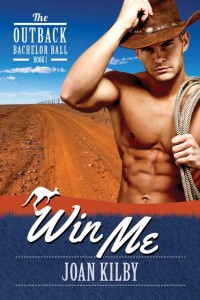 Three unlucky-in-love girlfriends make a road trip to the Outback Bachelor & Spinster Ball, a highlight of rural Australia life. One’s looking to move on, one’s thumbing her nose at romance, and one’s looking to slip away and hide. None of them are looking for love…

Three women are about to meet their match in a cowboy, a soldier and a country rock star. One magical night. One less than magical morning after. Forty-eight hours can change your life.

Feisty, fearless Ellie McFarlane has tried forever to get cattle station manager, Rick Drummond, to notice she’s not another cowhand. So when her gal pals talk her into glamming up for an Outback Bachelor and Spinster ball she’s eager to prove she’s all woman, all the time, and leave her boneheaded cowboy eating dust.

Sexy wrangler Rick is crazy about Ellie just as she is but her father – his boss – told him long ago that his daughter was off limits. Even though she’s all grown up now, Rick still feels it’s his job is to protect her, not seduce her. Plus, he’s finally got an opportunity to buy back his family farm, which means moving far away.

Ellie’s transformation from Cinder-Ellie to belle of the ball has Rick’s jaw dropping – and all the other cowboys falling at her feet. Ellie tries to revel in her new-found sex-pot status but without Rick it’s a hollow victory. Has Rick left it too late to claim the only woman he’ll ever truly love…?

Ellie met Rick when she was just fourteen years old when he came to her father’s cattle station to become the manager. She had a crush on Rick then but as she grew up her feelings turned to love. Unfortunately Ellie can’t seem to get Rick to see her as a woman now. She’s quit her job in Wyoming and has moved back home. She plans on attending the Outback Bachelor & Spinster Ball with her friends Jen and Beth to find her a man who sees her for the grown up she’s become.

Rick sees Ellie as a woman but her father asked him years ago to keep his hands off her and he complied. He loves his job and sees Ellie’s family as his own to a point. He would never jeopardize that connection or his job. When he finds out that Ellie is attending the OBSB he finds himself jealous and decides to attend as well.

This story unfortunately was my least favorite of the series. Though the friends to lovers theme is always a favorite of mine it just didn’t work for me here. In this book Ellie was the cause of most of my issues with the book. I found her to be whiney and wishy-washy and pretty immature. I wasn’t sure that she was ready to settle down and that didn’t improve throughout the book. She was wonderful with her friends. When they Skyped or got together they made me laugh and I loved the close bond that they all shared. They were all very supportive of each other and that showed me true friendship.

Rick honestly had the hots for Ellie. He wanted nothing more than to be with her but he knew that they were after different things in life. He was considering buying his father’s old farm (that is now deserted) and that would leave Ellie behind. He thinks this might be the answer to his issues as to whether he should go for it or not with Ellie. Of course when he sleeps with her at the ball that’s it for him. Unfortunately Ellie’s still unsure of his feelings and their complete lack of communication was a bit off-putting.

Overall a cute premise and a cute story but the characters weren’t my favorite.