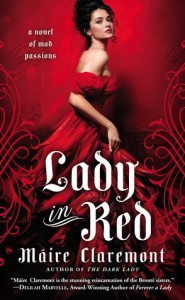 The Victorian era was full of majestic beauty and scandalous secrets—a time when corsets were the least of a woman’s restrictions, and men could kill or be killed in the name of honor…

Lady Mary Darrel should be the envy of London. Instead, all society believes her dead. For Mary holds a secret so dangerous, her father chose to keep her locked away…and have a grave made for her near her mother’s. Driven to the edge of desperation, Mary manages to escape the asylum, only to find that her fate yet again rests in the hands of a man…

Edward Barrons, Duke of Fairleigh, longs for some way to escape the torment of his father’s crimes. In Mary’s warrior spirit and haunted gaze—which so mirrors his own—he finally sees his path to redemption. He will stop at nothing to keep her safe, even as she seeks revenge. But will the passion they discover in each other be enough to save them from their demons?

In theory, this is not a book I should like. The heroine is (at the start) a drug addicted mess of an abused woman. The hero is supposedly a proud, depraved man yet all his actions are absurdly humble and good. The prose is at times melodramatic, and the story is full of abuse and exploitation of women. There’s even a bit of a love triangle. All of these are things I normally hate in books…and yet I could not put this book down! It is bordering on batshit crazy, but by the end I was enthralled.

The book is the second in a series, though truthfully I didn’t even realize that until after I read it–the story stands alone just fine. Mary Darrel is the daughter of a duke, but her father imprisoned her in an asylum and left her to die. She has spent the last several years being abused, but she finally escapes and turns to Yvonne, a madam who was friends with her dead mother. Though Mary refuses to divulge the entire story, Yvonne understands enough to know she can’t protect Mary from her powerful father, so she proposes that Mary agree to be the mistress of Edward Barrons, the Duke of Fairleigh. The two had met very briefly when Mary first arrives at Yvonne’s, and apparently Yvonne was confident enough in Edward’s interest to be certain he would want to help protect her. (Keep in mind Mary clearly tells Yvonne she doesn’t know if she can sleep with a man, which would seem to sort of negate the whole “mistress” part of the arrangement, no?) The weak explanation given is that Edward is trying to atone for his past sins and thinks Mary is his path to salvation based on the “look” in her eyes…or something. Just ignore the set up and give yourself in to the crazy! The rest of the book follows Mary’s journey back to herself (via plotting revenge against her father) and Edward’s struggle to put the past behind him.

When I was trying to come up with words to describe this book, “gritty” kept coming to mind. At first, it was kind of off putting, so much that I was tempted to completely stop reading at one point. After their very brief first encounter at Yvonne’s, the next time Mary and Edward meet is when Mary overdoses on a cocktail of laudanum, opium, and wine after just arriving in Edward’s house. Edward and his servant (who most certainly is not being paid enough to catch the vomit of his master’s new junkie mistress) have to tear her back from the brink of death. What a meet-cute! Mary is addicted to laudanum after being force-fed it for years in the asylum, and while the book doesn’t use her addiction a central theme, it does come up a few other times in the story. Mary has obvious PTSD from her trauma, and Edward’s touch sometimes induces VERY dramatic flashbacks. And Mary’s not the only abused woman in this book. In fact, women’s lack of power, and how they might regain some, are explicit themes of the book. Women are raped (not on screen), mentally and physically abused (some on screen, some off), treated like objects, etc. The three main women in the book, Mary, Yvonne, and Mary’s 17-year-old “stepmom,” all are misused by the men in their lives but exact revenge in the end, in brutal fashion.

But the book isn’t all darkness either. First, there is lots of witty banter to lighten the mood. Mary and Edward have some lovely light moments, such as when she is trying to undress him so she can explore a man’s body for the first time without fear. She manages to get his pants down but now has to have him sit so she can take off his boots.

“And he began to waddle. It was the only word for his ridiculous movement. Edward Barrons, Duke of Fairleigh, waddled, half naked, to his bed. Only someone of his nature could have still appeared dignified while his bound boots shuffled across the burgundy rug.

Mary clapped a hand over her mouth, suppressing a giggle.”

Edward’s friend Powers also plays a major role in helping Mary learn her own strength, and he and Mary have a love-hate relationship that leads to lots of great dialogue. Second, Mary’s strength and Edward’s gentleness make this a genuine romance instead of just a dark story. Edward is patient and kind, almost to the point of unbelievability, but it is his admiration for Mary that finally gives her the strength to look at herself in a new way. Finally, the plot is at times so crazy that it lightens the tone! Some things are so melodramatic (think soap opera), like Mary’s over-the-top evil father, that it’s easier to swallow the darkness because it’s also just a little ridiculous. Not so crazy it’s rubbish–just enough crazy to make it fun.

This book is not perfect, certainly. There is a little less normal conversation than I would have liked between the hero and heroine, and I wasn’t fully convinced that the sort of power Mary thought she reclaimed was genuine. Also, the timeline of the story seemed too short for either party to really overcome the horrors of the past. I’m very glad I agreed to review this book, though, or I would have stopped reading and never gotten to enjoy such a unique story.

This book is available from Signet. You can purchase it here or here in e-format. This book was provided by the publisher in exchange for an honest review.