It’s Monday again. I can’t quite figure out how the weekends are going so fast but they seem to be much shorter than say…2 days during the week? Do you feel that way? :0)

So last Sunday, the 29th, my oldest daughter went ice skating with some friends. She got her feet knocked out from under her when a kid decided to play human wrecking ball on the ice. She complained of pain so on Monday evening I took her for x-rays. They detected nothing but said sometime breaks in the wrist don’t show up until later. Two days later I got a call from the radiologist stating that she had a possible ligament disruption (?) and that she needed her arm/hand casted. While we were getting it casted yet another doctor looked at the x-rays and saw a hairline fracture. Wow – exciting times in Tracyland. lol She’s in some pain but doing well. They put a heavy plaster cast on her arm last Wednesday but she’ll get it off and have more x-rays taken by the orthopedist on Friday. Hopefully she won’t have to get another cast on but I’m not holding my breath. 🙂

I have 3 giveaways going at the moment:
1 print copy of Where the Horses Run by Kaki Warner (Intl. ok)
1 print copy of The Longest Night by Kara Braden (US and Canada Onlyl)
1 digital copy of Napoleon by JC Mells

What I read last week:

I started the week with Then Came You by Jill Shalvis. This is a great book that takes place in Sunshine, Idaho and is part of the Animal Magnetism series. I’ll post my review of this one tomorrow.

Next up was Napoleon by JC Mells. This is a NA m/m romance that has to do with shifters so it’s kind of paranormal in that aspect…except they don’t actually shift so it’s more contemporary, if that makes sense. The story is about Napoleon and his attraction for a straight boy. It’s fun and funny and I really enjoyed it. There’s a giveaway going if you’re interested in it. You can read my review and enter the giveaway here. 4 out of 5

Next up was Fueled by Lust: Cato by Celeste Prater. This is the story of Cato who is an alien of sorts (but looks human) who is scanning the airwaves when he hears Luna. He doesn’t know her name but he can’t stop listening to her. At one point he tries to see her but he keeps missing her. When she tries to get away from her boyfriend she’s beat up and Cato comes to the rescue. Of course he’s not sure how he’s going to tell her about the whole alien thing but he’s hoping she’ll stick with him. It was an interesting book. I thought parts of it were really good and had problems with other parts. 3 out of 5 (read for Book Binge)

Last for the week (I know, I didn’t read much, did I?) was The Wicked Deeds of Daniel Mackenzie by Jennifer Ashley. This is Daniel’s story – obviously by the title you figured that out – and he is the son of Cameron who we read about in The Many Sins of Lord Cameron. Daniel has grown up and he’s a charmer. He’s a wonderful man with a good head on his shoulders. He’s highly intelligent and enjoys those who share his sense of wonder with the world. He meets Violet who is basically a confidence woman. Her and her mother travel around supposedly contacting those on the other side for people. They can’t really contact them but they do a great show and make money doing it. Daniel figures Violet out from minute one but he’s fascinated by her brain and attracted to her beauty. When she disappears he decides to follow and doesn’t plan on ever letting her go. It was a sweet story and I loved Daniel. He was so kind and calm with Violet who had been used and abused in a previous life and I loved how he took care of her – how he let her be herself which she needed so desperately. Just a great book. 4 out of 5 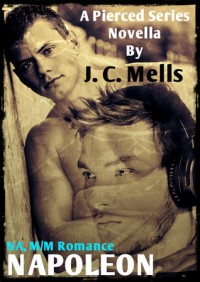 Napoleon Charming-Balak has been crushing on the "exchange student" that's been staying with him for the last six months.

The object of his crush: Sixten Dahl, a straight boy that seems to get his kicks from flirting with, then torturing, Napoleon in the cruelest of ways. Is it any wonder Nap, and his best friend Moused, are high-tailing it to New York City as fast as they possibly can? If there's one thing Napoleon is hoping for, it's that life in the Big Apple will be exactly what his self-esteem needs to get over the Swedish tease that has been tormenting him all summer long.

Napoleon, a werewolf, is gay and has a crush on a guy. Not too unusual except the guy he’s crushing on, Sixten, is straight. On top of that Napoleon is getting mixed signals from Sixten. Six keeps “seeming” to make moves on Nap but then Six pushes him away and Nap is more crushed each and every time.

When Napoleon leaves for college in NYC (he lives in Nevada), he’s thrilled that he won’t be around Sixten any longer and can try to move on. That’s until Sixten and his friend Theo show up at his house in NYC stating that they are his new roommates. Whaaaaa? Poor Napoleon, he just wanted to get away from his feelings for Six and he can’t do that when he’s got the room next door and he’s sharing a bathroom with the guy. The longer they’re together though Nap starts to think that there could be more to Six’s actions towards him than he thought.

I was contacted by the author and asked if I wanted to read this story and write a review. I have to say I was a bit hesitant because even though it says it’s a stand alone novella, that’s pretty hard to accomplish when it’s the fifth book in a series. I took my chances and I’m so very glad I did. It was really good and now I want to go back and read the first 4 books in the series. If her other books are written as well as this one was I know I’ll love them too.

This story is told from Napoleon’s POV and through this we see his personality shine through. He is charming (as his last name states), witty, loyal to his friends, and tells his story so well I couldn’t get enough of it. The author has Napoleon’s voice down and she did a great job making him a warm, funny and memorable character. Most of the time when I read a story that is told in first person I’m dying to know what the other person is thinking or feeling but I was so entertained by Nap that I never once felt like I was cheated in the story.

Napoleon and Six’s relationship was an odd one and it definitely kept me on pins and needles. It was sad and frustrating at times but ended well. I don’t want to give anything away so I’ll try not to tell you more. I do wish that we had gotten more of the last part of the story. There was something monumental that was going to happen and we never actually got to see how that turned out which was maddening, I must say. I shook my Kindle when it said “The End” like it was going to produce more pages or something. FYI – it didn’t, which sucked.

Napoleon was a great story and one I know I’ll reread in the future.