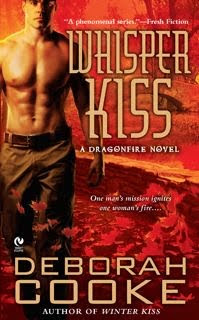 (Dragonfire #5) by Deborah Cooke
For millennia, the shape-shifting dragon warriors known as the Pyr have commanded the four elements and guarded the earth’s treasures. But now the final reckoning between the Pyr and the dreaded Slayers is about to begin…
Niall Talbot has volunteered to hunt down and destroy all the remaining shadow dragons before they can wreak more havoc. But fate has placed him in the hands of Rox, an unconventional tattoo artist who doesn’t even flinch when a shape-shifting dragon warrior suddenly appears on her doorstep. And as a woman who follows her heart in matters of passion, she makes the perfect mate for a firestorm with Niall…

Niall is in no mood for a mate. He’s on a mission to destroy all of the shadow dragons and the last thing he needs is someone taking up his time, especially someone woman who dresses like a punker. But Niall soon learns that you can’t judge a book by it’s cover. He sees in Rox someone that he can spend the rest of his life with.

Rox has always been fascinated with dragons so when she meets one she’s not too shocked about it. Then she meets Niall and although she likes his looks she’s pretty sure he’s too conservative for him. They both learn that they are using their outer shells as armor.

But armor they need when a powerful dragon, Chen, decides that Niall is the one dragon he needs to add to his collection. Now Niall and Rox have to protect each other from evil.

When I first started reading this book I wasn’t quite sure how Rox and Niall were going to do as fated mates but Cooke brought them together in such a way that was very believable. Ok, the men are dragons but it’s still believable! lol Rox and Niall were perfect for each other and I think it added to the story that they might not have jumped into the sack right away. They got to know each other and then made the decision…you know, just like in regular dating. 🙂

This was a great addition to the series. Deborah Cooke has a wonderful way of bringing the men/dragons from past books into each story and showing us a little of where they’re at now. It’s something I very much enjoy while reading her books.

This book is available from Signet. You can buy it here 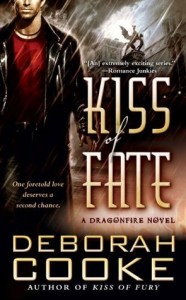