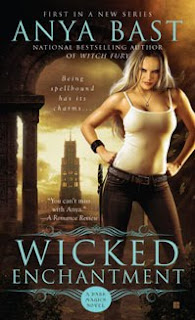 (Dark Magic #1) by Anya Bast
When you’re a half incubus, your reputation precedes you…
All eyes are on Gabriel Mac Braire the day he makes his first appearance in the Seelie Court, including those of Aislinn Finvarra. Despite deep bitterness over her last failed relationship, Aislinn cannot help but be curious about the half incubus who is known to possess dark magick, both lethal and sexual in nature. Rumors abound of the women who have become enslaved to his irresistible charms.
So when the Summer Queen of the fae orders Aislinn herself to act as his guide in the court, she is understandably on guard. She’s fallen under the spell of far less persuasive men before. In addition, Gabriel might be more than he seems and his true mission is far from innocent.
This time, Aislinn must protect not only her heart, but her very life…
Despite everyone else’s enchantment with Gabriel when he enters the Seelie Court to gain entrance, Aislinn isn’t all that impressed. She is actually quite perturbed at having to be his guide for the week he’s to be in residence until the Summer Queen makes her decision. But there proves to be much more to Gabriel than Aislinn thought and she’s soon doubting whether she can keep her feelings for him pure and innocent.
Gabriel, at the Seelie Court on the Shadow King’s mission, is supposed to talk Aislinn in to moving to the Unseelie Court of her own free will. You see, Aislinn has Unseelie blood in her – though no one knows but her and her friend Bella who was previously banished from the Seelie Court. Aislinn is bored in the Summer Queen’s court but she’s not sure she wants to take a chance and head to the other court after all the horrible things she’s heard about it.

While Aislinn is making her decision, love is forming between Gabriel and Aislinn. People, both within the Fae boundaries and outside of them, are plotting Aislinn’s death and one of her good friends is spying on her. Aislinn has more trouble than she knows what to do with and she’s not sure who she can trust.

I tried to read this book several times and couldn’t get through the first chapter because there just seemed like so much information. But after talking to Holly she assured me that once I got past the first few chapters, where there was a bunch of world-building and other information, that it flowed more easily. Well I’m glad that I forged on this time because it ended up being a very good book.

I liked Aislinn’s character and that’s always a plus in paranormal and fantasy romance for me. She was strong but not exactly but kicking strong that I was turned off by her. She was pretty centered even in the face of everything that was thrown at her about her life, who she was and the future she was dealing with, and I admired that. She did get a bit wishy washy with Gabriel at times but things were in such an uproar that I had to forgive her those times.

Gabriel was a great character too and I thought he brought a great balance to the story as well as Aislinn’s character. Kind of dark to her light.
Overall it was a well told story and I’m looking forward to reading more in this series.
Rating: 4 out of 5