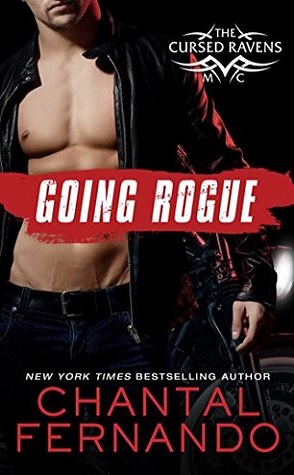 Love blossoms in the most unexpected of places in this sweet and steamy Cursed Ravens Motorcyle Club title featuring a hunky bad boy and a charming nurse.

The men might tease Rogue and call him pretty behind his back, but no one is going to say that to his face. As the vice president of the Cursed Ravens—and with an unpredictable and unruly temper—respect is given to him at any cost.

But Rogue reins himself in when he visits his mother in a local nursing home. Overwhelmed with guilt that he can’t take care of her himself, he can barely handle watching her fade away with dementia. And he knows the staff is exceptional—especially the sweet and beautiful caregiver who pays extra attention to his mom.

It isn’t easy working at a nursing home, but Zoe enjoys spending time with her favorite patient Anne. She knows Anne has a son who dutifully visits her, but when Zoe sees the tall, muscled, handsome stranger, she can tell he’s trouble—beautiful trouble. She knows he’s a Cursed Raven and she knows better than to admit she’s attracted to him. There’s no way she'll date an MC member. Been there done that. But as Zoe and Rogue start to get closer, they realize one way or another, they’ll have to fight to stay in each other’s lives.

Zoe loves her work in the nursing home.  While not glamorous, she loves the connections she makes with the residents.  She especially loves Anne, and when she meets Anne’s son, she really likes him as well.  He proves to be thoughtful and brings her lunch every day.  Rogue is Anne’s son and he really likes Zoe as well.  He wants to take it slow with her and Zoe likes that.  She’s still a bit hesitant because she dated a biker before and he just wanted to hide her away, never introducing her to his MC and then she found out she was his piece-on-the-side as he already had a girlfriend.

While Zoe and Rogue’s relationship flourishes there are things happening with the MC that get a bit tricky.  Rogue’s mom, Anne, also has some issues and that causes problems between the couple.

This was a cute story.  I enjoyed reading Rogue’s story after meeting him in the first two books in the series. Zoe was a sweet girl and I liked them together.  I think Rogue needed someone more down to earth in his life and Zoe fit the bill.

The situation with Rogue’s mom was intense and heart-breaking.  Zoe and Rogue both loved her to pieces and that made things a lot tougher.  Anne was the one who caused conflict between Rogue and Zoe but I was happy that they worked it out.

Overall I liked the book and thought it was a nice read. As a single father of two girls and the sergeant at arms for the Cursed Ravens Motorcycle Club, Jack “Knuckles” Chester doesn’t have much free time. And having earned his road name from his reputation as a fighter, Knuckles isn’t one to back away from a challenge.

But what he'll never admit out loud is that his two daughters have changed him irrevocably, softened him even. And these two girls are the only women who will ever hold his heart forever. That is, until he meets the cousin of another biker’s old lady.

Celina is nothing like the women Knuckles used to date. She’s a journalist for the local newspaper, dresses well, and basically just has her life together. And the last thing she wants is to be involved with a Cursed Raven. But when the ripped, badass biker worms his way into her heart, she has trouble remembering all the reasons they would never work.

But when a scandal at her newspaper breaks the thin trust she has with Knuckles, will she walk away for good? Or will Knuckles fight to keep Celina in his life?

Celina is a journalist and loves her job.  She loves being independent and making her way in the world.  She’s not really open to a relationship as her last one did a number on her.  When she heads to the Cursed Ravens MC clubhouse for her cousin Erin’s birthday party the last thing she expects to happen is to fall for one of its members.

Knuckles is the Sergeant-at-Arms for the Cursed Ravens MC.  He’s also a father of two daughters and does his work for the Ravens around his kids.  He loves his MC but he also loves his girls and will do anything for them.  He wasn’t planning on meeting anyone and hadn’t been attracted to a woman in a long time but when he sees Celina in the clubhouse he’s immediately smitten.

Celina has a bit too much to drink at the party so Knuckles ends up driving her home and then goes the next day to check on her. She keeps telling him that she’s not interested in dating him but he is persistent and their friendship soon turns into a relationship.

This was a fun story.  I really liked Knuckles a lot as he was just a good guy.  The author really doesn’t get into anything that the MC is criminally into.  The stories are definitely more relationship driven and the men just happen to be in an MC.  In this story there was one incident that was something I could see happening at an MC but other than that we don’t get much info about anything the MC does.

I’m not normally a fan of romances where the heroine is a journalist (actually I don’t like it when the hero is either but that so rarely occurs) but since I read book one in this series I thought I’d give it a shot.  The conflict had to do with her work (as expected) and I could see it coming for miles down the road.  Fortunately, that was worked out rather quickly.  Celina and Knuckles were good together once they each let their guards down.  Despite Knuckles chasing Celina he still held himself back a bit until later in the book.

The Cursed Ravens MC novels are pretty short and fluffy, but the author gives me enough about the characters that I end up wanting to see what the next guy is up to.  Point in her favor. 🙂 Erin Dawson had the perfect life growing up in a perfect home with a perfect family. Her parents gave her and her sister everything a child could want. But after learning that the man she’s called “dad” her whole life isn’t actually her biological father, Erin is determined to find the man who is.

Armed with her original birth certificate, she finds her father, but begins questioning if her mom had been right all along to keep this information buried. It turns out he is the president of a motorcycle club, which could not be further from the life Erin leads. But, she’s determined to get to know the man who she gets her striking blue eyes from. Despite getting what she wants and finding her biological father, it’s the slightly older, much rougher but incredibly sexy biker Ace that catches Erin’s eye.

As the new “princess” of the Cursed Ravens, Erin is learning a whole new world, but her father has made it clear she is off limits. Will Ace follow his President’s orders or will he put his heart ahead of his duty?

Erin lived her whole life thinking that the man she called “dad” was indeed her father.  When she finds a birth certificate that says otherwise, she’s upset and wants to know what’s going on.  Her mother was dating a man who was in an MC and when she found out she was pregnant she left him and never told him about the baby.  The mom even went as far as faking a birth certificate when she got married so that Erin wouldn’t know that her step-dad wasn’t her father.

Erin’s mother tells her where to find her father and Erin heads there to confront him.  She walks into the clubhouse with no problem and demands to see Gage Parker. When he finds out that he has a daughter that he never knew about he’s understandably upset but welcomes Erin with open arms.  He tells all the MC members that she’s off limits to them but there’s one man that Erin can’t keep away from, and he seems to be ignoring his president’s wishes as well.

Ace isn’t prepared for Erin.  He’s a lady’s man and has women around him all the time.  When he sees Erin he’s pulled to her and can’t keep from wanting to be around her constantly.  He’d love to keep her with him for good, but Erin has her life planned out and her college isn’t anywhere near the MC club. Erin loves being with the MC however and is surprised at how comfortable she feels around these men except when someone starts trying to hurt her.  That hurts her physically, but when she finds out that her father is hiding some information from her she realizes that she doesn’t know the MC at all and she’s not sure she wants to.

I wasn’t sure what to expect when I picked this one up.  I like MC romances and this one was good.  There were some things I thought were strange about the MC – their clubhouse was a house and Erin just walked right up to it with no one questioning her at all.  IDK, maybe because she was a woman?  It just found that strange.  I also found it odd that Ace was ignoring his presidents warning to stay away from his daughter but that’s explained later in the book.  I did find the attempts on her life a bit….much, but it worked in the end. The MC didn’t seem too fierce I’m sure not all of them are the same.

Ace and Erin were good together.  I thought they really cute together despite the fact that one was an MC member.  Ace was a sucker for Erin from almost minute one and I loved that he was so good to her.

The other men of the MC were definitely interesting and I look forward to reading more about them in the future.