Synopsis: She thought she had lost

everyone during an early attack by Napoleon’s forces. Then upon returning to England she loses

the first battle surges by Le Grande Armée. Left with an injury to remind him of that time he

help the War Office as a code specialist.Nothing could surprise him more than walking into

injured with no memory of their time together. Is she a traitor? Where has she been all this time?

And is their love strong enough to survive or will the truth tear them apart forever?

From a young age I could always

be found carrying around books to read while watching my grandmother’s soap operas with her. I

friends and me to act out. Once I outgrew the children’s and YA books, my mom introduced me to

an entirely new world – contemporary romance. Upon discovering I had a love for history I began

devouring historical romances. One day, sitting in a college British History class, something the

professor said made me think, I wonder. I quickly called mom (also a writer) and ran the idea by her.

After being told, “Of course you can do it, you’re my daughter,” the rest, as they say, is history. I

currently share my love of reading with the next generation as a high school librarian, and share my

personal life with my demanding dog trapped in a cat’s body, Ajax.

*Please note: This is not a Book Binge sponsored giveaway 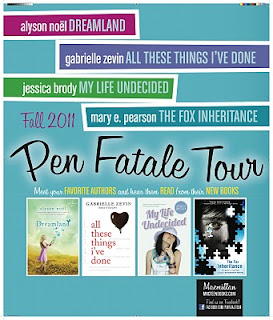 I saw this on Alyson Noel’s blog and thought it would be a good idea to share with all of my readers over here. If you’re looking for author events in your area and you live in any of the areas where this book tour is going on than this information is for you!

There are four authors that will be touring around the States and those fabulous authors are Alyson Noel, Gabrielle Zevin, Jessica Brody and Mary E. Pearson.

So if you’re in the area, stop by and check them out. It looks like a good time will be had by all! =) 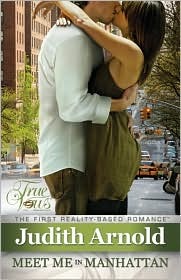 Holly‘s review of Meet Me in Manhattan

Ted Skala and Erika Fredell were the perfect New Jersey high school sweethearts. Like many teens Ted and Erika spent plenty of time in parked cars under the stars, but there was so much more between them than the chemistry that ignited their courtship, and Ted couldn’t imagine a life without Erika. By graduation he was ready to get engaged. Erika, however, was ready to spread her wings and faraway she flew to college. She broke his heart. She sailed the world.


Fast forward 15 years. Living in Manhattan, Erika successfully climbs the corporate ladder but her love life stinks. Ted is also living the life of a successful businessman in Manhattan, and he’s involved in a serious relationship. Problem is, he still can’t get Erika out of his system. When fate intervenes and their paths cross, the result is emotionally explosive and that old black magic is back with the force of a super nova. But Erika once ravaged his heart: How can Ted ever trust her again? And now that he’s seriously involved with another woman, how can Erika hope for a second chance with the man she never should have let go?

When I first heard about the Reality-Based Romance™ HCI books was putting together, I was really intrigued. People submit their real life romances and then an author takes the story and expands on it. Way cool. Only..I have to be honest and say I struggled a bit with that while reading. Fiction is fiction..it’s ok to love or hate the character, because they don’t exist. But these are real people, and this is really their story. So I found myself almost feeling guilty when I was annoyed at one of them, or feeling almost like a voyeur during some parts of it. Silly, maybe, but there you have it.

Ted developed a crush on Ericka the first time he ever saw her, when they were in 10th grade. For 2 years he pined for her, thinking she was out of his league. Ericka was always focused on her riding, and though she knew Ted casually, she didn’t think about him as someone she’d be interested in until just before senior prom. Then things changed, and she couldn’t get him out of her head. Just after graduation a friend of theirs finally pushed them together and they started a summer romance. Ted knew Ericka was the perfect girl for him. He loved everything about her – her determination, her free spirit, her zest for life. They spent an amazing summer together, falling more in love and developing a strong bond. But there was a pall hanging over their time together, because Ericka was leaving for college in the fall, and Ted wasn’t.

As much as Ericka loved Ted, and loved being with Ted, she wanted to go out into the world and experience life. She wanted to climb mountains, travel the world, learn to ski. There were times when she thought she could do all those things with Ted, but he scared her. He made her think she would lose herself in him and she didn’t want that. So she broke things off with him when she moved away to college. Ted was devastated. She completely shattered him. He wanted to marry her, to be with her, to have her love him the way he loved her. He sank into a deep depression, then started traveling, working his way around the country, trying to exercise her from his mind and never quite succeeding.

16 years later they meet up again in Manhattan. Both are successful in their chosen fields, and neither has ever really been able to get completely over the other. Ted is in a relationship, but he’s unable to commit. And Ericka hasn’t been as lucky in love as she has in business. After meeting for a drink, they decide they need a chance to get past their feelings for one another. Ted is determined to keep his heart safe from Ericka this time. But Ericka is ready to commit..to be with Ted as he wanted to be with her all those years ago. Can Ted let go of his hurt feelings and trust Ericka not to break his heart again?

This is the first novel I’ve read by Judith Arnold. She did an excellent job of taking us through a romance that spanned 16 years. I was totally caught up in Ted and Ericka’s relationship in both the past and present.

I really enjoyed the journey both characters took, though I have to say Ericka’s attitude bothered me at times. Maybe because I sympathized so much with Ted? She was right that they were probably too young to get married, but she seemed almost selfish at times. She didn’t consider him and his feelings, only herself. Which, really, is pretty typical of a high school girl. I loved that Ted loved her so completely. Maybe her love for him was a puppy love, but his was true and lasting.

Overall a sweet novel. Arnold really captured the teen/high school angst, but still made this a fresh, lovely story.

(these books aren’t related, but they’re all Reality-Based Romance™)

This book is available from HCI Books. You can buy it here

Do you love romance?

Please join us for a super-fun Reality Romance Twitter Chat with MEET ME IN MANHATTANauthor Judith Arnold, as well as the real couple the book is based on!  We’ll be giving away signed copies of MEET ME IN MANHATTANevery 10 minutes during the hour-long chat!
Register to attend the live Twitter chat by going HERE and receive 5 free chapters of the book to check out in advance of the chat!
The chat will take place on Tuesday, October 5th, at 6pm PST/9 pm EST.  Remember to use the hashtag #TLCbookchat.  We hope you can make it!