Tag: Authors that Screw Over Their Readers 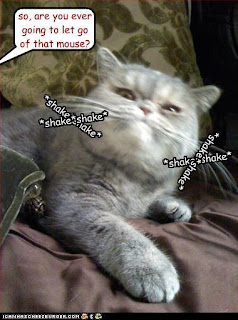 Like Loading...
33 Comments
Tagged: Authors that Screw Over Their Readers, Holly Says, Rants, Rants, Stupid People Piss Me Off

Back in 2006 when I would read things like “OMGawd, I just started the DH series. It’s soooo good. I can’t wait for Acheron‘s book! I can’t believe I have to wait for two whole years” I wanted to cyberslap them and say bitch, please I got really annoyed. I’ve been waiting for Acheron’s book since 2000. That’s the year two thousand. I still remember talking to this friend I had that loved the series as much as I did at the time and just bemoaning over the fact that it was going to be YEARS before Acheron’s book would come out. How were we going to wait that long? We would surely die if forced to wait that long. Back then, five to seven years seemed like an impossibly long time. Holding my baby and thinking that he was going to be at least five years old when Acheron’s book finally came out was just unfathomable to me.


Not only was the publishing date sketchy (for years) but when it came to Ash’s heroine, Sherrilyn Kenyon refused to give it up. In my post about forgiving her for anything, I don’t think I would have forgiven her for an Ash/Artemis pairing. I used to make myself sick thinking about the possibility that Artemis would be Ash’s heroine. The sole voice of reason was Holly. She would tell me over and over again that there is no way it could be Artemis. Even though she was WRONG about who the heroine was, at least she was right about Artemis.

When Acheron came out, I was at the book store first thing in the morning. I took it home, started it at 10am and finished it at 5pm. There was not the sense of disappointment that I was expecting when I finished it. I was just happy that Ash finally got what he deserved. My review of it is completely biased. There is no way I could have given that book anything less than a five.

Which brings me to this new fad that authors seem to be going through.

They introduce this extremely amazing alpha hero that makes a statement from the time he makes his first appearance to when said hero gets his book. Only HE’S NOT GETTING HIS BOOK.

Getting so invested in one character just hasn’t turned out well for me. The only characters that I will stay invested in are Hawke and Alaric.

Which characters are you invested in? What book have you waited for the longest? Who is your “Acheron”?