Tag: An Heiress in London 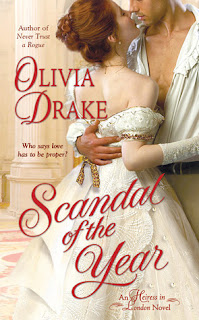 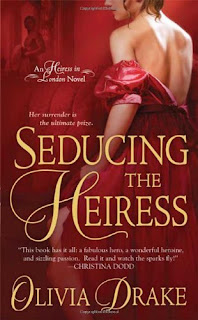 Holly’s review of Seducing the Heiress (An Heiress in London, Book 1) by Olivia Drake

Her wealth and beauty have made Miss Portia Crompton the catch of the season. Secretly determined to wed the maharajah’s son she left behind in India, Portia ignores the money-hungry bucks who ply her with bouquets and bonbons. But one suitor will not be deterred: Colin Byrd, Viscount Ratcliffe. He is persistent and presumptuous—and wickedly tempting.
Colin has no delusions about romance. He’s a rogue, a womanizer, and a murderer, and seduction comes as easily to him as breathing. Portia’s fortune is an irresistible lure until Colin’s mercenary scheme hits a snag. Winning her dowry is no longer enough—he wants her heart and her passion. The more adamant she is in her refusal, the more determined he is to seduce her…

Colin is desperate for money. Because of a past scandal he’s basically ostracized from society, which means he doesn’t have a slew of heiresses to choose from. He sees Portia Crompton as the perfect solution to his problem. If only he can convince her of that.

Portia has no delusions about Colin and what he wants from her. Unfortunately for him, she’s already got her heart set on someone else – someone much more worthy of her. But she finds herself charmed despite her conviction not to be and is drawn to Colin in ways she hadn’t predicted. When the Duke of Albright, Colin’s bitter enemy, sees Colin is interested in Portia, he does his best to court her himself. Caught between two men, Portia is unsure what to do.

Colin becomes even more determined to win Portia’s hand once the Duke makes his intentions known. Now all he must do is seduce Portia so she’ll agree to marry him….But in the end, will Colin be the seducer or the one who is seduced into love?

I really enjoyed both main characters. Colin at first comes off as an arrogant, indolent man who wants an easy way to fix all his problems. As the story progresses we see there’s more to him, however, and it was easy to sympathize with him. Though he intends only to seduce Portia into marrying him, he finds himself falling for her – which is very disconcerting to him. He doesn’t want to want her, he only wants her fortune. But once he sets his mind of having her he sets about it in a very charming way. I thoroughly enjoyed his efforts.

Porita was a practical, level-headed woman. She didn’t suffer delusions about herself, her family, or – most importantly, Colin Byrd, Viscount Ratcliff. She’s determined to wait until the end of the season so that she can return to Arun, the love she left behind in India. I liked that though she was set on her course, she wasn’t stupid about it. When presented with what the consequences of her actions would be if she did flee to India, she didn’t just shrug it off or willfully lift her chin and exclaim she would do it anyway. She thought. And considered. It was very refreshing.

I was disappointed that the focus seemed to be taken off Portia and Colin once they did become a couple. The first half of the book is devoted almost solely to them, yet the second half focused more on intrigue and outside conflicts.

This was a quick, light read. I breezed right through it, thoroughly entertained.