Well I’m back in the saddle again! Last week was just awful. I mean, horrible-just-let-me-die awful but I survived and so did my hubby. We thought the kids were safe (I was hoping to delude myself into believing they wouldn’t catch it) but last night my oldest started complaining about a severe belly ache and then the fever started up and then the vomiting started. Oy. At least she slept through the night which was good for her.

My youngest was on a roll this past week. She asked for toast the other day with “that poisonberry jam” on it. I, of course, started laughing and couldn’t stop and then told her it was boysenberry jam. Too cute.
Then the other night I had an appointment and put a shirt on that has these designs all over it – one being straight across my ass. She asked what the markings meant and I told her that it was tribal for wide load. She laughed and laughed and then said, “what’s tribal?” then paused, “and what’s a wide load?” Omg I thought my sides would split I was laughing so hard. When I explained it to her she laughed even more – the stinker. lol

So last Sunday I was so sick I didn’t read at all. I just laid on the couch and stared at whatever the kids happened to be watching. I did see the movie Lost in Austen which was kind of cute but I can’t say I remember too much about it! lol The rest of the week I just read so there are quite a few books:

I started off with The Lone Texan by Jodi Thomas. This is my first Texan read by Thomas. I read this one for The Book Binge and will let you know when my review posts.

Next up was a total impulse buy/read: wtf by Peter Lerangis. I was shopping for Blaze of Memory by Nalini Singh at Barnes and Noble and even 2 days after it was released I had to go searching cuz it wasn’t on the shelves. Arg! I hate that. I found it on a cart in the middle of BFE B&N which was just weird. Anyway, for some reason it was next to wtf and I just kind of flipped through wtf for a minute and decided to buy it – it was a Simon Pulse so I knew it was a YA book. It turned out to be good, but not great. It was 6 alternating pov’s and corresponding timelines and how they all interact and effect each other. Basically the story of a drug deal that wasn’t really a drug deal gone wrong. The details that initiated it, the characters involved, what happened before, during and after. The book definitely kept my attention and it was pretty short (well, 250 pages but a small tradepb and large font) but the ending just didn’t do it for me. Everything just came out smelling too much like roses and in real life I just couldn’t see it happening. Maybe if it had been set in an alternate universe but not when it’s a contemporary novel. 3 out of 5

Next up was my Tracy’s TBR Challenge read which was An Affair Before Christmas by Eloisa James. I could swear that I’d read a book by her before but after looking at her website I don’t think I have, but I liked it. For a historical though it was set up much like I’m used to UF books being with all of the different stories going on at the same time. Because of that I thought that the main romance suffered for it. It was still good but not as great as I thought it could be. The main story is between the Duke of Fletcher and Poppy, the Duchess of Fletcher. They meet and fall immediately in love. Four years later they are completely frustrated with each other. Poppy just lays in bed and doesn’t respond to Fletch no matter what he does to her and Poppy leaves because she’s frustrated with him as well but for different reasons. I discovered during my perusing of James’ books that this is book 2 in the Desperate Duchesses series. I haven’t read book 1 but unless you all feel I need to I think I’ll just move on to book 3. Anyone think I must read book 1 first? 3.75 out of 5

After that I moved on to On The Edge by Ilona Andrews. This was another new to me author. I did attempt to get into her Kate Daniels series but it just wasn’t for me. But this book? This one I really liked. It’s just a great mixture of fantasy, paranormal, romance and a bit of horror. It was such a mish mosh but it really worked for me. It pretty much takes place in the Edge which is a world between the world of the Broken (our world) and the Weird (a magical place). The Edge has magic too, but not like the Weird. The main characters are Rose from the Edge and Declan from the Weird. Good story. Since this is book 1 in a new series I’ll be interested to see where the story goes next. 4.25 out of 5 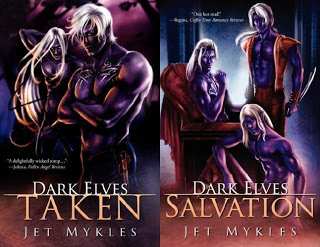 After seeing that I was debating about reading Jet Mykles’ Dark Elves series, Tam was nice enough to send me the 2 print books which included the first 4 stories. I have to say that after starting the first story in book 1, Taken, I wasn’t sure if I was going to be reading further. You see these Dark Elves were created by the goddess Rhae to be her consorts (read: fuck toys) and when she left the earthly plane she discovered that she’d made an error – there were no women. How were the elves to continue procreating? So she gave the elves a spell that would help turn human women into elves. So the elves kidnap women, set the spell and then they all go about taking 9 day turns with them until they (hopefully) find their truemate – that one woman that can have their babies (which are all male, btw). If the women don’t find their truemate they are then put into the brothel because the can never leave the underground city. The whole premise put me off a bit. And the heroine in book 1 was just prickly. She was a warrior so I could see that she wouldn’t stand for being kidnapped but I just couldn’t like her…and she fell in love in what felt like a millisecond, which I don’t care for. Since I’d started book 1 I decided to finish it and go on to book 2. This is the book that made me want to read more. As usual Jet Mykles has a way of getting me into the stories and I found myself reading not just one book but both. The second story, Mastered, was better than the first, imho and I liked the characters more. Book 2 which included stories 3 – Salvation & 4 – Dissent were even better. These had more of a political intrigue to them along with the romance and sex and that held my interest. I now find myself wondering what the hell happens next. lol I guess I’ll have to go find out. Taken 3 out of 5 Mastered 3.25 out of 5 Salvation 3.5 out of 5 Dissent 3.5 out of 5

Last on the list for the week was The Christmas Ball an anthology with stories by Jennifer Ashley, Emily Bryan and Alissa Johnson. All the stories are different but all end at the Hartwell’s Christmas ball. It’s interesting to think of everything that was going on at the ball at the same time at the end. They were all sweet little romances and I enjoyed the book overall – with Traditions by Alissa Johnson being my favorite I thinkl. I imagine it would be difficult to write a short historical like that but I really felt that they all did a great job. Overall rating 3.75 out of 5

I hope you all have a great week!
Happy reading