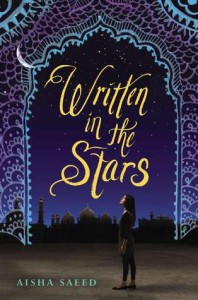 Whitley’s review of Written in the Stars by Aisha Saeed.

This heart-wrenching novel explores what it is like to be thrust into an unwanted marriage. Has Naila’s fate been written in the stars? Or can she still make her own destiny?

Naila’s conservative immigrant parents have always said the same thing: She may choose what to study, how to wear her hair, and what to be when she grows up—but they will choose her husband. Following their cultural tradition, they will plan an arranged marriage for her. And until then, dating—even friendship with a boy—is forbidden. When Naila breaks their rule by falling in love with Saif, her parents are livid. Convinced she has forgotten who she truly is, they travel to Pakistan to visit relatives and explore their roots. But Naila’s vacation turns into a nightmare when she learns that plans have changed—her parents have found her a husband and they want her to marry him, now! Despite her greatest efforts, Naila is aghast to find herself cut off from everything and everyone she once knew. Her only hope of escape is Saif . . . if he can find her before it’s too late.

This was a lovely/horrifying story that had me staying up all through the night to finish it. It was engrossing and smoothly-written, which makes the horrifying story content that much more striking.

I’m not really sure what to say about it. It’s a pretty straightforward storyline, and a lot of its focus is just on exposing the issue of forced marriage to an audience that might not know much, if anything, about it. There’s not much depth to it, but as an introduction, it strikes just the right note.

I think what strikes me the most about this book is how it puts the blame on cultural permissiveness. This isn’t just one family doing a thing, it’s the entire community letting it happen and helping Nailia’s captors. It’s cultural attitudes that put the focus on family reputation over girls’ consent. It’s a system that pits women against each other, out of fear or something else, and prevents them from banding together. (I swear, the scene where Naila and her cousin sort of fearfully pull away from each other made must sit and stare a wall for a few minutes.) I love that this was a book about a whole system doing this, not Naila’s family being “evil.”

About the only thing I didn’t enjoy was the weird pacing. There was a huge chunk of the book devoted to Naila slowly figuring out that her parents are looking for a husband for her, when we know from the cover summary that she’s going to be married off. It dragged out that portion of the book for no pay-off, and conversely the ending of the book was rushed. Her “out” from the marriage had a kind of exasperated, “Okay, I’m bored with this now” kind of feel to it. I feel like the pages spent on needless teasing could have been better spent on the ending.

This title is available from Nancy Paulsen Books.  You can purchase it here or here in e-format.