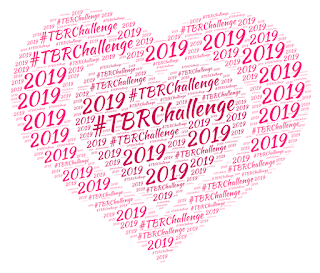 This month’s prompt for the TBR Challenge was Series so I chose to read River Marked by Patricia Briggs because I am determined to get that entire series read this year. I want to catch up by the time the next book comes out so wish me luck on that. Anyway, on with my review… 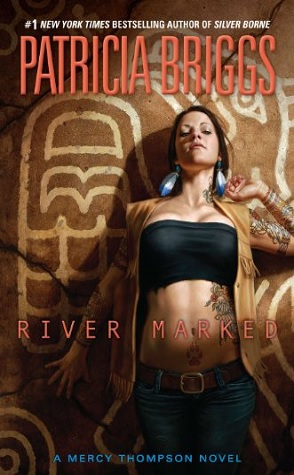 Mercy Thompson is a shapeshifter, a talent she inherited from her long-gone father. And she's never known any others of her kind. Until now. As Mercy comes to terms with this new information, an evil is stirring in the depths of the Columbia River. Something deadly is coming, facts are thin on the ground and Mercy feels ill at ease.

Mercy Thompson brings the badass shenanigans again in River Marked. In this book, she finally marries hottie Alpha Adam Hauptman and they’re headed on their camping honeymoon where they will be completely alone and not have to deal with anyone’s problems…until they get to their campsite and have to deal with everyone else’s problems. The problem that they’re dealing with this time around is a river devil monster who is eating the people who are getting too close to her in the river. When Adam and Mercy happen upon an injured man in the boat and smell his fear, they can’t walk away and this river monster is unique and it is magic of the American Indian variety so Mercy and Adam find themselves getting acquainted with the local Indian tribes….and Mercy’s sort of maybe ghost of a father? Yeah, there’s a lot going on in this book and I thought Briggs did a great job of pulling this story together.

I really liked that there was a Charles and Anna partnership feel to Adam and Mercy in this one. They worked together to fight the bad guys and had only each other that they could trust completely and rely on. The wealth of love that they have for each other melts me at every turn and I just really love their love. Mercy’s letter to Adam at the end was the best way to end this book and honestly, I just can’t wait to continue this series. I’m low key annoyed at myself that I kept this on my TBR shelf for so long. But no more, 2019 is the year that I finish out this series. This was another fantastic addition to the Mercy Thompson series so I definitely recommend it if you started the series but haven’t gotten around to this one. It’s good stuff, I promise! MacKenzie Decker was a question Avery never got to ask, much less answer. They met when she was a young reporter fueled by ambition, and the ink on Deck's first NBA contract was barely dry. Years later, they've climbed so high and lost so much, but one thing hasn't changed. The attraction that simmered between them in a locker room before is still there. With success like theirs, everything has been possible . . . except them.

That was then. But what about now?

In an effort to support our wonderful romance community this year, Book Binge decided as a blog that we’ll be participating in Super Wendy’s 2019 TBR Challenge this year. January’s prompt was We Love Short Shorts! (shorter reads) so I chose to read Kennedy Ryan’s Hoops Holiday since I’ve been meaning to read it long before now.

I finished my first prompt of the year so this is me right now:

Hoops Holiday is a short story from Kennedy Ryan’s Hoops series and it follows MacKenzie Decker and Avery Hughes as they make that journey towards true love that is about ten years in the making. Deck meets the woman of his dreams in the locker room after a game, tries to hit on her and she is not having it. Deck struck out but ten years later, his attraction to Avery Hughes is every bit as fierce and for the first time in a long time, they’re both single and can finally explore the attraction that Deck knows is brewing both ways and not just on his end. Deck just needs to persuade Avery that she should definitely take a chance on him. Avery is going through some stuff having to do with her last relationship and a new relationship just isn’t in the cards for her. She can’t deny that seeing Deck again brings back the attraction she walked away from all those years before.

Kennedy Ryan knocked this short story right out of the park and she’s fast becoming a favorite of mine. She handled the romance between Deck and Avery really well considering she didn’t have a lot of page time to really dig into their pasts, their present and hell, even their futures but I didn’t feel like the story, or the romance, for that matter, was missing anything. I liked that there was history between Deck and Avery (how memorable was that first meet-cute tho??? Ha!) I really enjoyed getting to know both Deck and Avery. I also really enjoyed seeing how they came together. It was just great, solid writing.

This book also comes with some cute extras from the previous books in this series and I loved them. They were like second epilogues for both August and Iris, along with Jared and Banner. I’m glad that everyone is still going through it with lots of love on their side.

If you’re a fan of the Hoops series by Kennedy Ryan, this short story isn’t to be missed. It’s chock full of a romance that is sweet, fun and yet still tugs at your heart the way that only Kennedy Ryan can tug.