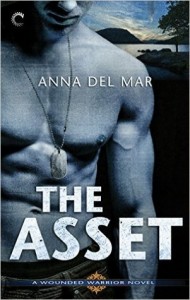 Ash Hunter knows what it is to run. A SEAL gravely injured in Afghanistan, he's gone AWOL from the military hospital. Physically and mentally scarred, he returns home to his grandmother's isolated cottage—and finds a beautiful, haunted stranger inside. Like recognizes like. Lia Stewart's in hiding from the cartel she barely escaped alive, holed up in this small Rocky Mountain town. Surviving, but only just. Helping the wounded warrior on her doorstep is the right thing to do…it's loving him that might get them both killed. Soon, Ash realizes he's not the only one tormented by the past. Pushing the limits of his broken body, testing the boundaries of her shattered soul, he'll protect Lia until his last breath.

Lia Stewart is on the run.  She’s survived for the past two years on luck and some help from some unlikely friends.  She’s now somewhat settled in a small town but is constantly on edge and ready to run.  When a man shows up to rent a room from her she’s immediately suspicious until finds out that he’s the grandson of one of her friends (now deceased) and is severely injured.  She finally agrees to let him stay and then ends up nursing him back to health.

Ash knows that Lia is hiding something but she’s not forthcoming about what, or who, that something is.  As the two spend more time together they get to know each other and start to fall in love.  Lia knows it’s a bad idea as she knows anyone she loves will die because of her.  She tries to fight it but soon realizes that it’s too late as well as the fact that Ash is too stubborn to ever let her go.

When I read the blurb for this book I was curious to find out exactly what Lia was hiding from.  When I found out I was kind of floored as it was so much more horrifying than I could have ever imagined.

Lia was an incredibly strong woman.  After hearing what she had been through in her life I couldn’t believe the woman was still sane!  She was, however, and was incredibly smart for someone so young.  I loved her protectiveness towards those she cared for and her animals even though she was the one who needed the protection.

Ash was a gruff, stubborn hero but I liked him just the same.  He wasn’t judgmental and instead gathered his friends to help protect Lia even though she didn’t know that’s what they were doing.  He was a great guy and one I would definitely want to have on my side.

The story was a great one and I can’t wait to see what Anna del Mar comes up with next in the series.  The fellow wounded warriors were a rag-tag bunch but a group of really good guys and I’m anxious to see what del Mar has in store for them.