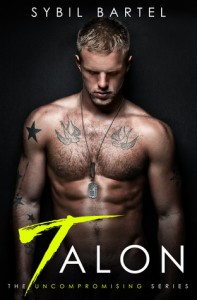 I surf.
I fuck.
I pretend to smile.

Two years ago my life was perfect, until it wasn’t. I scattered my wife’s ashes then walked away from the Marines. I didn’t think I had anything left to lose.

The blond showed up at my surf shop, beaten and stabbed. I did what I was trained to do—I stitched her up. I didn’t have a clue who she was and I told myself I didn’t care. Until they came looking for her.

I swore I’d take my last breath before I let anyone else hurt her except I didn’t know she was keeping a deadly secret. Now I had two choices, her life or mine.

Marriage and combat taught me the same thing—I was no one’s hero. And I was about to prove it.

Talon is at his surf shop when he sees the girlfriend of an acquaintance sitting out on the wall of the beach across the street. He’s seen her for the past two days and finally goes out to see what’s up. He finds her beaten and stabbed by her boyfriend. Talon who was a medic in the Marines gets Nicole sewn up and takes care of her a bit but when her boyfriend comes for her and Talon tries to protect her, she goes with the boyfriend. Talon, who knows that Nicole doesn’t want to be with her boyfriend any longer, knows there must be something more going on there but as he has found himself falling in love with Nicole, he’s not about to leave her in the hands of an abuser. Even one that is the son of the president of the local MC.

Talon gathers his friends (who were apparently all introduced in a previous series that I had not read so I was a bit confused) and they go after Nicole. When Talon gets Nicole back, however, he finds that there’s much more going on than the boyfriend’s abuse. Talon then has to find a way to keep Nicole safe and then embark on a mission that will save the life of someone she loves dearly.

This was a good story, despite my confusion with the characters. I did find that frustrating as it was supposed that anyone reading the book would have read the previous series. That wasn’t the case for me, obviously. Once I got over that frustration I liked the flow of the story. I did feel that Talon fell for Nicole way, way, way too fast but obviously the man knew what he wanted and went for it. I can’t fault him for that even if I would have liked to have seen the relationship grow a little more first.

I’m definitely now intrigued by the characters and will definitely be reading more in this series in the future.