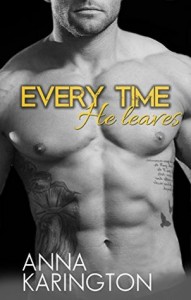 I'm different now. I won't be that girl again. I'm in control. I'm the one who's going to leave him wishing he'd given me his everything when he had the chance...

Lana Raeven and Jarek Dean shared a night of passion, but the next morning, she woke up alone. Nine years later, Lana works as a successful event coordinator for a prestigious company. Bold and confident in every area but love, she hasn't ever recovered from Jarek's abandonment. However, a chance encounter with her former lover grants her an opportunity to take back her power.

Rather than chastising him for his cruelty, she plays unfazed and invites him back into her life. Using her ingenuity and sensuality as weapons, she draws him in with the intention of destroying him as he once destroyed her. But her plan for revenge isn't as simple as she initially believed, for the more time she spends with Jarek, the more she's reminded of why she loved him. And if she isn't careful, she could lose him all over again.

When Lana sees Jarek for the first time after nine years she’s shocked. He’s not the boy who left her sleeping in his bed while he took off and was never heard from again. He is definitely a man now and a millionaire to boot. Lana acts like his abandonment was no big deal and works out a plan to get back at him for breaking her heart. She tries to stay away but they find themselves in bed more often than not which is messing with her plan.

On top of all of this there are Lana’s sisters – one who thinks she can get Jarek for herself. She only wants his money and Lana’s not about to let that happen. The problem is that Lana never got over Jarek and now that he’s back she’s not sure she can give up the possibility of forever just to get revenge.

This book. Ugh! So frustrating. Lana was like this huge ball of rage because of Jarek and how she felt he wronged her but yet kept sleeping with him and then calling it revenge. She would think all of these things in her head but never say them which I found irritating. There was A LOT of stuff going on in Lana’s head and since the book is written in first person we get A LOT of introspection. Quite frankly I found myself skimming after a while because her thoughts just weren’t that interesting nor moved the book forward.

By the end of the book I disliked Lana more than when the book first started. I had no idea who Jarek really was as again, the book was in first person and we only saw what Lana was thinking about Jarek. Lana’s mother and older sister were both gold-diggers and her other sister had a drinking problem – which Lana helped get her off of (that part was ok).

I really have nothing good I can say about this book – it just didn’t work for me. I disliked the characters for the most part, I didn’t like Lana at all, the sex scenes were forgettable as there was no chemistry between the Lana and Jarek and by the time I was ¼ of the way through I didn’t care if anyone got their HEA.