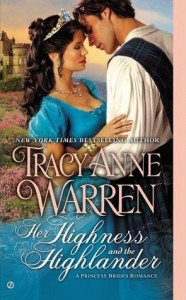 While journeying home from Scotland, Princess Mercedes of Alden’s coach is set upon and her personal guard killed. Barely escaping with her life, she seeks help at a nearby inn. But with no money and looking little better than a beggar, the townsfolk think her claims of being a princess to be nothing more than a far-fetched tale. Utterly forsaken, Mercedes wonders what is to become of her.

After years of soldiering, dispossessed Laird Daniel MacKinnon is finally coming home. At an inn he is confronted by a bedraggled young woman claiming to be of royal blood. Daniel doesn’t believe her wild tale, but when she asks for his protection, he agrees to serve as her bodyguard—in turn she promises to reward him handsomely once they reach London. But Mercedes is still being pursued by ruthless hunters whose motives remain unclear.

As the danger increases, so does the desire she and Daniel feel for each other, until the two of them must face the greatest danger of all—falling in love.

Princess Mercedes of Alden is traveling by coach from Scotland – where her school is located – to London. On the road the coach is attacked. One of the footman tells Mercedes that they are after her and she should run into the woods to save herself. While running she turns back and bears witness to the murder of her entire entourage, including her uncle. She’s devastated and scared out of her mind but she manages to escape her attackers. She runs and runs and ends up at an inn/tavern where she explains herself. When she states she’s a princess the proprietor and then everyone else laughs at her thinking she’s crazy. She has no money and no resources to get home but luckily one of the travelers at the inn, Daniel MacKinnon, takes pity on her and has the inn take care of her.

Daniel’s on his way home to Skye and just happens to be at the inn. He really doesn’t think that Mercedes is any saner than the rest of the people but he feels sorry for her. He gets her a room, a bath, orders a dress or two, money for the stagecoach to London and then he’ll be on his way in the morning. That actually happens but he starts to feel guilty and turns around to escort Mercedes to London himself. While they are traveling the couple start to fall in love – Mercedes more than Daniel – but he wants to bed her, so they end up getting married.

Getting to London Daniel is shocked to learn that Mercedes was telling the truth and now he’s not sure what will happen with the marriage. Mercedes’ father isn’t pleased with the marriage and wants Daniel gone. But is the danger to Mercedes in the past or is there still reason to believe she’s in danger. Daniel won’t leave until he knows.

When I read the blurb on this book I thought it sounded interesting. I love books set in Scotland and especially with Highlanders. I love books where the hero and heroine are traveling together as it seems to create a particular bond between the characters. While all of that was involved the execution of the story didn’t bowl me over in the end. I found myself skimming the story at times and then realizing what I was doing would go back and read fully. If a story can’t keep my attention all that well there’s probably something missing as I’m a pretty forgiving reader.

The story was good but improbable. Possible, yes. But probable? Not so much. Throughout the story we’re led to believe that Mercedes was viewing a world that she’d never seen before. The way OTHERS lived was quite shocking but she surprisingly was open to this. I’m not saying that it couldn’t happen but she was just too accepting of it for me to believe.

When it came to Daniel asking her to marry him I was happy for them but yet, I couldn’t help but think that this girl (she was only 19), who had been raised to follow everything her parent said and knew that her father wouldn’t approve, accepted so easily. Of course when it came to telling her father she acted like a child and completely hurt Daniel’s feelings.

Daniel was really a great guy. He may have asked Mercedes to marry him for all the wrong reasons but he was still an honorable man. He was strong, protective, had a good moral compass and really was a stand up guy. I frankly didn’t like him and Mercedes together until the end of the book – probably because I didn’t like her all that much and wanted him to be with a different heroine! lol

In the end it was cute. I normally like Warren books a lot but this one just didn’t work as well for me.