Ella Quinn's bachelors in The Marriage Game series are charming and cunning when it comes to the ways of love--until the right woman captures their unsuspecting hearts. . .

Custom-made gowns. . .nights at the theater. . .and a host of eligible bachelors. Accustomed to living a quiet life in the Scottish Borderlands, Lady Serena Weir has never had any of these luxuries. But when Serena's brother demands she finally have a Season in London, she's thrust into a glamorous world she's only dreamed of. . .

Robert, Viscount Beaumont, remembers all too well what it feels like to be in love. That is why he must keep his distance from Serena. He's only felt his pulse stir the way it does now when he made the mistake of loving the wrong woman once before. Yet the more he strives to resist his feelings, the nearer he is to falling under Serena's seductive spell. . .

Lady Serena gets sent to London from Scotland for a season when she is 26 years old.  Her parents had passed and she’d taken care of the family estate and dependents since she was 14 years old and her brother was off being a soldier.  When he returns with his new wife, the wife gets rid of Serena by sending her off to London.

Serena is not sure how to handle herself as she’s never been in any kind of society.  Luckily she has an aunt and a cousin from her mother’s side of the family who are sponsoring her and getting her ready.  She may not have the social wiles, but her kindness and innocence shine through and make her the talk of the ton.

Robert, Viscount Beaumont, is struck by Serena’s beauty from the moment he sees her.  He had eschewed ton events for years but he now attends as many as possible, just to dance and stare at Serena.  He is charming and soon Serena is in love with him.  He wants her desperately, but has stated that he’ll never love again (after a fiasco when he was a young man).  Robert decides he’ll ask Serena to marry him but before that happens, he compromises her.  Serena is pissed off and says she’ll not marry him because he doesn’t love her.  She then leads him on a chase, but in the end he realizes he loves her.

This would have been a great end to this story and would have happened about 50% of the way through the book.  But no, the book continued on for another 200 pages and gave us another romance, local country children getting kidnapped and the resolution of that, as well as an old bed partner of Robert’s causing trouble.  It was ridiculous.  If we could have just had the story wrap up after Robert told Serena he loved her I probably would have given this book a better rating.  Unfortunately with all of the unnecessary parts that were added into the book, the rating didn’t dip down, it took a huge dive.

I did love Serena in this book.  She was kind, generous and all that was good.  You would think that she would have been over the top, but she wasn’t.  She just knew her business when it came to running an estate, and she wasn’t afraid to tell Robert her thoughts.  Robert was a bit of an ass at first, but he settled down and became a good man.  I was happy for the two of them.

The romance was worth reading in this book but the rest…not so much.  I can’t recommend this one unless you plan on just reading the first half of the book. 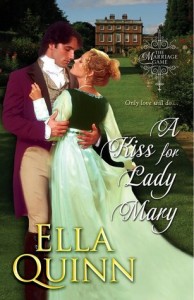 Handsome, charming, and heir to a powerful Viscount, Christopher “Kit” Featherton is everything a woman could want—except interested in marriage. So when he hears that someone on his estate near the Scottish border is claiming to be his wife, Kit sets off to investigate.

Since her parents’ death, Lady Mary Tolliver has been hounded by her cousin, a fortune-hunting fool after her inheritance. Refusing to settle for anything less than love, Mary escapes to the isolated estate of rakish bachelor, Kit Featherton. Knowing he prefers Court to the country, she believes she will be safe. But when Kit unexpectedly returns, her pretend marriage begins to feel seductively real…

Lady Mary is a quiet, unassuming woman who is being stalked by her cousin, Gawain. Gawain is being prompted by his mother to marry Mary so that he can get her trust fund. Despite attempts by Mary and her brother to contact Gawain’s father, Mary’s uncle, they have been unsuccessful in getting him to explain why he is pushing Gawain on her.

After two years of moving from place to place Mary’s grandmother comes up with a scheme to place her at the home of someone that Gawain doesn’t know so that he can’t find her (why they didn’t place her in some out of the way place before that is beyond me). In order to do this, however, she needs to act like she is married to the man of the house – a Mr. Featherton. Mary knows of a Mr. Featherton but is assured that this particular Featherton is unknown to her. After almost a year by herself Mr. Featherton shows up and is righteously angry that someone would claim to be married to him. Turns out that Mary does know this Mr. Featherton and even had her eye on him during her one and only Season unfortunately he didn’t seem to notice her at all.

Kit Featherton is the epitome of the proper gentleman. He is angry when he finds out that someone is posing as his wife but when he finds out it’s Mary he calms down. He has been looking for her constantly for the past two seasons and has always been enamored with her. He now sees that as so many people believe them married there is nothing to do but marry Mary. Unfortunately Mary is determined to have a Season and to fall in love. She wants the romance, etc. Kit and Mary have misunderstanding after misunderstanding as neither knows how to act around the other. Fortunately fate steps in and the thin veil that had been hiding their feelings finally comes down.

This was a very pleasant book. Mary was kind and giving and Kit was all that was honorable and gentlemanly. Unfortunately that didn’t make for an overly exciting book. While the story was good and well written, it just didn’t make me want to turn page after page. I got frustrated with both the MC’s as they just were so prickly and honor bound with each other. I mean, Kit wouldn’t even think of kissing Mary until they were betrothed. Again, not overly exciting.

Gawain was really in the story peripherally. We read about him several times and his quest to find Mary once he had lost her but other than that he didn’t turn out to be too much of a villain.

There was a secondary love story within the book. It was about a man and a woman who had fallen in love when they were teens but her father had kept them apart. It was a bit complicated with them marrying and then being told it wasn’t legal when it actually was. He also had 2 children he had never seen as he’d left for America. While a sweet story it was a bit odd to be plunked down in the middle of this book. It almost felt like filler as Mary and Kit had already gotten together and got their HEA. Once they declared their love the book should have been over (imho) but we had this extra story to read.

Though the story wasn’t what I typically look for and like in a regency romance novel it was still a decent read.