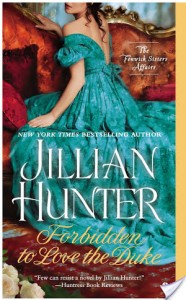 Lady Ivy Fenwick is desperate. Since her father’s fatal duel, she and her sisters have sold off every valuable possession to make ends meet. With the manor stripped bare, Ivy has one last resort: Apply as governess to the Duke of Ellsworth’s wards.

James should have known better than to hire the desirable lady who had fallen on hard times—and who tempts him at every turn. As her employer, he tries valiantly to remain noble and not let a kiss they shared as strangers years ago entice him. Yet the more he learns of Ivy’s secrets, the more he wants her. And when another suitor proves aggressive, James is confronted with a challenge: Surrender Ivy or fight for the woman he’s come to love against all odds, knowing that it takes a scoundrel to trump a scoundrel.

Tracy’s review of Forbidden to Love the Duke (The Fenwick Sisters Affairs #1) by Jillian Hunter.

Ivy and James “met” at Ivy’s debut. He was completely taken with her and stole a kiss. She was smitten from the word go even though he was masked and she had no idea who he was.

Five years later James is back from the war (which is where he left the day after he first met Ivy) and he’s interested in her home, Fenwick. When he arrives home he also discovers that his brother’s kids are in residence as their mother has abandoned them to run off with her lover (their father is still fighting in the war). He puts an ad in the paper for a governess the same day that he sees an ad seeking a governess position and realizes it’s Ivy. He hires her for the children and pursues her relentlessly.

Ivy and her three sisters have been living half lives for the past 5 years. Their father fought in a duel and died the day after Ivy met James. They have been barely surviving at Fenwick but are adamant about keeping creditors and those who would take Fenwick from them away from them. She is excited and scared about being a governess as she’s not sure that she can do the job – she is the daughter of an Earl, after all. She does a fine job, however, and makes the children her priority – even though James keeps getting in the way.

On top of the children and her feelings for James there’s a man, Sir Oliver, a poet, who shows up at Fenwick trying to court Ivy. He, of course, has ulterior motives as he heard there’s a treasure hidden within Fenwick somewhere. Although his motives stink he does find himself caring for the Fenwick sisters – of course that doesn’t stop him for looking for the treasure.

The story was a good one although it was a bit slower than I expected it to be. I really liked Ivy and her sisters and their fortitude in the face of adversity. James was a good guy for the most part. I liked him with Ivy and I thought he was pretty darned understanding of the poet despite his dislike of him.

Although the story was good it didn’t have a whole lot of conflict. It was more Ivy trying to make her decisions about James and Oliver looking for the treasure although even that part was a bit abbreviated. I would have liked to have seen more sister interaction before James showed up – just to show their solidarity – but it was what it was. I look forward to reading more about the Fenwick sisters in the future.

This title is available from Signet Select. You can buy it here or here in e-format. This book was provided by the publisher in exchange for an honest review.