Keep Rage together at all costs...

Powerhouse PA Dimity Graham is off her game. Her career is everything to her and she never lets anything personal mess that up. So how can she explain getting busy between the sheets with Rage's nice-guy drummer Seth Curran? She's supposed to be keeping this band out of trouble, not getting into it. But before she can put everything back where it belongs, Seth needs her help.

Faking a relationship seemed like a good idea that night, right before they fell into bed together. But standing on New Zealand soil, facing the people he disappointed to pursue his dream, Seth doubts he and Dimity will convince anyone they're hot and crazy for each other. To his surprise, Dimity is working her magic on everyone and they're all convinced this is the real deal. The problem is, he's almost convinced, too.

Dimity is out and about with Rage drummer, Seth Curran.  She’s looking to get laid but he’s drowning himself in alcohol because his childhood sweetheart, who had recently broken up with him, told him that she’s already engaged.  Dimity is trying to help him when she sends some texts to his ex – with the thought that she will help him get her back.  Seth is all for it.  Of course they both drink a lot and then end up sleeping together which brings up feelings Dimity didn’t know she had for Seth.  He’s determined to get back with his ex, however, so Dimity shoves her growing feelings for Seth to the side.

Once the pair arrives in New Zealand – Seth’s home country – he’s excited to see his family again and try to reconcile with his father who wasn’t happy when he left his family business to become a rock star.  Dimity is anxious to hear the result of her boss Zander’s surgery.  As it turns out, Seth ends up helping Dimity as much as she ends up helping him by being his fake girlfriend.  In the process Seth realizes that it’s not his ex that he wants in his life.

I was looking forward to this book because I really liked both Seth and Dimity in the first book, Rise.  That was a great story and I had high hopes for the second book in the series.  Unfortunately I was a bit disappointed.  Not that this book was bad, it wasn’t, I just had some issues with it.

My biggest issue with the story was Dimity.  On the one had I really liked her and what she was trying to do with Seth and helping him get back with his ex.  I liked her dedication to the band as well.  Overall she wasn’t a bad person at all.  What I didn’t like was her temper and her selfishness in some instances.  At one point in the book she just goes off on some people and it brought my respect for her down a few notches.  I don’t care if the people you went off on forgive you – you should have never said some of those things in the first place.  Rude, disrespectful and self-serving is what she was– and to people who were her friends!  I get the reasons behind why she felt justified in acting that way but it didn’t excuse the actual act. Then she sneakily went around trying to sabotage their relationship.  Gah!  Don’t get me started.  I was so annoyed at her I had a hard time continuing to read.

Seth was a great guy, really.  He pretty much saved the book for me because he was so wonderful.  I wanted his dad to see what a good guy he was too but he was stubborn. I wish that we could have seen a bit more development in his relationship to Dimity after his epiphany about his ex and their life together.  Despite that I thought he was the glue that held the story together. 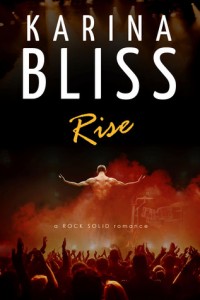 Even rock stars deserve redemption... Acclaimed literary biographer Elizabeth Winston writes about long-dead heroes. So bad-boy rock icon Zander Freedman couldn't possibly tempt her to write his memoir. Except the man is a mass of fascinating contradictions-manipulative, honest, gifted, charismatic and morally ambiguous. In short, everything she seeks in a biography subject. When in her life will she get another chance to work with a living legend? But saying yes to one temptation soon leads to another. Suddenly she's having heated fantasies about her subject, fantasies this blue-eyed devil is only too willing to stoke. She thought self-control was in her DNA; after all, she grew up a minister's daughter. She thought wrong. Rock star Zander Freedman has been an outlier-many would say an outcast-for most of his life. But there's no disaster he can't overcome, from the breakup of his band to the inevitable damage to his reputation. His Resurrection Tour is shaping up to be his greatest triumph-if his golden voice holds out. Contracting a respected biographer is simply about creating more buzz. Elizabeth's integrity is the key to consolidating his legacy as one of rock's greats. All the damn woman has to do is write down what he tells her. Not force him to think. Or encourage the good guy struggling to get out. And certainly not make him fall in love for the first time in his life. Turns out he "is" scared of something: being known.

Zander Freedman has one person he wants to be the writer of his memoir – Elizabeth Winston. He will do and say anything to get her on the project because he not only loves her work but she has integrity and he feels that’s what he needs to back this project. The problem is that he promises her a lot and then doesn’t come through on most of it. He certainly doesn’t tell her everything about his life that needs to be told and doesn’t plan on changing that. Elizabeth starts to get under his skin, however, and he finds himself falling for her. This causes him to want to protect her even more from what he feels are his dark secrets.

Elizabeth meets Zander before a show and she’s practically mesmerized by his charm and charisma. She agrees the project but makes sure that she keeps it professional at all times. That doesn’t stop her from lusting after him in private. Once Zander makes a move on Elizabeth it’s all she can do to keep her head around him and work on the book. Of course life isn’t easy and things in Elizabeth’s personal life back home cause her to have to leave the tour temporarily. With Elizabeth gone Zander has to make some decisions about his life, his future in the music business and some decisions about Elizabeth as well.

This wasn’t the book I thought it would be when I read the blurb as I thought we’d see more of Zander’s asshole-ishness throughout the book. While he wasn’t exactly perfect I didn’t seem him as someone who needed complete redemption. He did prove himself quite a vocal and mean drunk later in the book but by that time I’d definitely warmed up to him. He cared deeply for those in his employ and didn’t want to see anyone truly hurt by his actions.

Elizabeth wasn’t a prude but wasn’t anyone I would have picked for Zander in the long run. She was brilliant and saw through his bullshit, sure, but she just didn’t strike me as the woman for him. That being said I thought the author did a good job of trying to convince me that these two were meant for each other. Though I didn’t feel the attraction between them I did see the love at the end of the book.

The story follows not only Zander and Elizabeth but the other band members as well as Zander’s ex-girlfriend, Stormy, and his PA, Dimity. I loved that these secondary characters played a major roll in the story as it gave it all more substance in the end.

Overall a good story. I didn’t read the books that Bliss wrote that previously included Zander but I didn’t feel that I needed to to enjoy this book.

This title is self-published. You can buy it here or here in e-format. This book was provided by the publisher in exchange for an honest review.