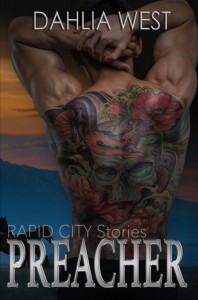 Jack "Preacher" Prior is at a crossroads -- literally. Left for dead in the Badlands, he's managed to survive. He's stolen a truck, but where can he go? Body broken, mind reeling from betrayal from his own MC brothers, he knows he won't last a day back in Rapid City in his current condition.  Two roads stretch out in front of him. One leads to the city and one deep into the black hills where no one knows him as the former President of the Badlands Buzzards. Revenge is not a question; it's an absolute. Preacher will get his due soon enough or die trying.

Erin Walker is at a crossroads of her own. Dealt a bad hand by being the daughter of Buck Walker, ex-Rodeo Champ, she's made her own way in the world without his help. She owns Thunder Ridge Ranch outright, and she's carved out a piece of paradise for herself with her own two hands. She's not giving it up without a fight, but she's alone in the world with no one to trust.

In Erin, Preacher finds something that doesn't exist in his own world: a smart, fierce independent woman who sets his blood on fire. For Erin, the mysterious man who threatens her life might very well be the only one who can save it.  Can Preacher put aside his desire for revenge against his old MC and accept what's in front of him: a woman who needs him and a future worth having? Erin knows in her heart that Preacher is a bad, dangerous man, but can she trust him anyway?  Not every choice is theirs to make, though, and in Rapid City the past never stays buried.

I came upon this book quite by accident as I was wandering through the book deals at Amazon.  I hadn’t read a Dahlia West book for a very long time and the title caught my attention so I decided to give it a whirl.  I think it was a freebie or one of the 99 cent sale books.  Anyway, the description was also interesting to me as I am going through my MC phase and on top of that, there was the weaving in of two lives, both of which were trying hard to find a way to survive and keep their lives intact.  For Preacher, simply surviving physically was the initial challenge.  He had been successful in uncovering a conspiracy in his club that would have resulted in his losing his life.  What he didn’t anticipate was the presence of another coup that was forming over simple greed.  That effort to oust him and take his life was successful except somehow he survived, stole a truck, found himself in Erin Walker’s barn, and their stories become interwoven from that time on.

Erin, on the other hand, was a champion barrel racer and a woman who was not only estranged from her father but was permanently angry at his hurtful ways and disregard for integrity that had driven her mother away.  She knows he is doing all he can to undermine her efforts to establish a successful horse rehabilitation center, built on her previous successes with animals that were due to be destroyed and who were brought back to full health.  In fact, the horse on whom she won so many of her rodeo races was just such a horse.  She knows her dad is working against her and wants her land to be part of his already gigantic ranch.  She also knows that now that she had restored her broken down ranch to working order and has begun to gain a good reputation that her land is 10 times as valuable as it was when she first purchased it.  She has her first important client that will mean significant income for her enterprise.  And then Jack “Preacher” Prior shows up in her barn, seemingly endangering her life.

This is an unusual love story as it brings two people into each other’s lives with all the differences and burdens and hurts that have made each of them wary of relationship.  There are lots of MC novels where romance manages to flourish, but this story really begins when Jack has lost his way, is wondering what the future holds besides revenge and probably death, while realizing that there is a minuscule nugget of hope coming to life within him and which continues to grow as long as he is with Erin.  I guess what kept me turning the pages was the unusual aspects of these characters–their need for independence that seemed to bump up against the even deeper need for connection and affirmation from someone else.  Erin knew what it meant to be abandoned by everyone who had ever been important to her.  Jack was a lone soul as he tried to figure out how he was going to function in a world where the only family he had ever known, his own MC that he and his father had built together, had fallen apart and turned on him.  As time went on they became involved and their life became stable and prosperous.

Now we have the crisis:  the old forces that were still pursuing the assets of Jack’s MC even though the club had been taken down by the DEA.  Erin’s dad was still trying to undermine her operation.  Either one of these is sufficient to tear them apart.  Needless to say, this is where the “rubber meets the road” and the heat and conflict in the story become intense.

This novel is, as far as I can gather, an offshoot of a previous series about another MC in Rapid City, SD made up of some old acquaintances and past friends of Jack’s, some of whom are a part of this story.  That series is several books in length but this story seems to cap off the Rapid City grouping.  It is truly a stand alone book.  I found it to be a complicated story, the kind I really enjoy, with characters coming at the reader right and left, tension waxing and waning throughout, with the reader trying to figure out how Erin and Jack are ever going to find their happy ending while all these negative forces keep intruding on their life, just as they seem to get things smoothed out.  It is just the kind of story that keeps dragging me back after I had to put it down because of other obligations.  I found myself thinking about the story and wanting to get back to it as soon as possible.  That’s a really good book as far as I am concerned.  There are some surprises, some intensely emotional passages, times when the lives of both Jack and Erin hang in the balance.  There isn’t a great deal about the Badland Buzzards MC in the book but they are always there in the background.

All in all, it is a well-written novel with a very good balance of relationship and the development of Jack and Erin’s relationship on the one hand, and the tension and push/pull involved in the MC story.  Ms West brings it all together skillfully.

You can read more from Judith at http://www.drjsbookplace.blogspot.com.