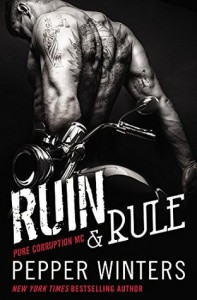 "We met in a nightmare. The in-between world where time had no power over reason. We fell in love. We fell hard. But then we woke up. "And it was over . . ."" RUIN & RULE She is a woman divided. Her past, present, and future are as twisted as the lies she's lived for the past eight years. Desperate to get the truth, she must turn to the one man who may also be her greatest enemy . . . He is the president of Pure Corruption MC. A heartless biker and retribution-deliverer. He accepts no rules, obeys no one, and lives only to reap revenge on those who wronged him. And now he has stolen her, body and soul. Can a woman plagued by mystery fall in love with the man who refuses to face the truth? And can a man drenched in darkness forgo his quest for vengeance-and finally find redemption? RUIN & RULE is a full-length book at 436 pages and ends on a cliffhanger. Cleo and Kill's story continues in SIN & SUFFER.

A woman wakes up and has no clue who she is or where she is. She is blindfolded but when a man takes her blindfold off she knows she knows him from somewhere. She just can’t remember anything. She discovers that she is one of 6 women who were kidnapped for sex trafficking. The president of the club, Arthur Killian aka Kill, decides to take her home with him because she looks so much like the only woman he’s ever loved – but that woman died years ago.

Little by little the woman, who remembers her name is Sarah, starts to remember snippets of memories from her childhood and she’s pretty sure she is the girl that Kill loved. Kill is positive that she is not the girl and almost sells her. When he finally believes that she is the woman he loved named Cleo he doesn’t handle the truth well and has to rethink his plan of vengeance against the people who he believed killed Cleo in the first place.

Ruin and Rule was a pretty confusing book from start to finish with just a few non-confusing chapters thrown in. The fact that Sarah/Cleo has no clue who she was made for a confusing time for both her and the reader. Add that to the confusing time that Kill was having with having Sarah look so much like his dead Cleo it was kind of crazy.