Series: Loving on the Edge 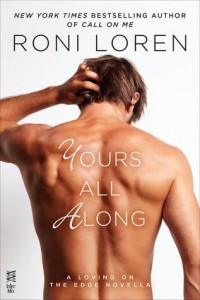 Four years after an accident tore their friendship apart, Hunter and Devon are living separate lives. Hunter is now the all-America hero—a congressman’s son and a pro pitcher in Houston preparing to marry his beauty-queen girlfriend. Devon is in Dallas running a new restaurant.

But when Hunter unexpectedly shows up in Devon’s bar, Devon can’t turn him away. Damn it if the man isn’t still gorgeous. But engaged? Hell no. All he’s doing for Devon is bringing back memories of their college-roommate days, and the night their relationship went too far. Turns out Hunter has never forgotten it either.

Now Devon can’t help but be drawn in all over again by the only guy who’s ever gotten close enough to break his heart. Maybe one more night together would be enough for both of them to finally move on. Or maybe one night will change everything…

Tracy’s review of Yours All Along (Loving on the Edge #7.5) by Roni Loren

Hunter feels like he’s suffocating. His fiancé is constantly talking about wedding arrangements and the wedding is still 3 months away. She finally realizes that he needs a break and decides to send him to a resort where a friend of hers works. He heads down there but ends up at the restaurant where his one time best friend, Devon, works. Hunter gets drunk on wine and Devon ends up driving him to his hotel. While in the car Hunter thinks back on their friendship and its abrupt ending four years before.

Back in college they had been in the same fraternity. Devon was gay and out and Hunter had no problem with that, unlike the other guys in the house. Hunter volunteered to room with Devon and from there their friendship grew. With their easy relationship and kidding around soon the other guys in the house were treating Devon like one of the guys. Devon loved his best friend but he was also in love with him. One night sharing the same bed (after another frat house pranked them) the walls came down between them and soon they were sharing more than a bed.

I’ve only read one story by Roni Loren and that was an m/f romance novella. I really liked her style so when I saw Yours All Along I had to see what it had to offer. I’m so glad I read it because it was just a sweet story.

I really liked both Hunter and Devon as characters. While most of the book was a flashback to college there was enough in present time to satisfy my curiosity about them. I liked them as young men and as full grown adults as well. I felt they were perfect for each other and adored the chemistry between them. Even when Devon was pissed off at his friend you could tell he cared about him.

I didn’t think the ending was abrupt exactly, but it ended with Hunter’s decision to be who he was. I wish we would have gotten a little bit more at the end of the book with regard to the fall out that was bound to occur from Hunter’s revelation about his love for Devon. I would have loved to have had Hunters father’s expression described when he found out he couldn’t control his sons decisions any longer. That would have been awesome. lol

In the end I thought it was a very sweet and lovely story. I love friends to lovers stories and this sexy little novella hit the spot.