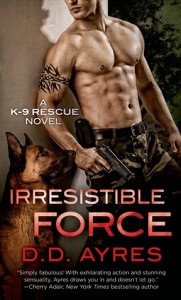 For Shay Appleton, it's love at first sight when a gorgeous stray dog is brought into the animal shelter where she works. She just knows he'll make a terrific watch dog-and with an abusive ex who won't let go, she needs all the protection she can get. But Shay never suspected that her new pet is actually a trained police K-9 named Bogart-until Bogart's even more gorgeous, human partner shows up on her doorstep.

Officer James Cannon is one tall, strong alpha male who's convinced that Shay stole his dog. But once he gets closer to the suspect, he realizes that this stubborn, independent woman not only needs a guard dog, she needs James as well. It seems that someone from her past is stalking her, and threatening her life. When danger meets desire, will James risk his career and his best friend...to protect the woman who's stolen his heart?

Police officer James Cannon is determined to find his missing partner – who is a dog. His partner – K-9 cop, Bogart, has been missing for a month and James finally gets a tip that tells him where the dog is. He confronts to woman who has Bogart but she swears she didn’t steal him. Shay, who calls the dog Prince, saved him from being destroyed at an animal shelter when a woman came in claiming that the dog was feral and a danger to everyone. James gets Bogart and then heads to the local police department to finish paperwork (he’s not in his jurisdiction). He heads back to Shay’s place as she seemed more than a little jumpy after their slight altercation. He saves her from her ex-boyfriend who won’t take no for an answer.

After he gets rid of the Shay’s ex one thing leads to another and next thing you know the two are in bed together. Shay immediately regrets their intimacy and tells James that this will go no further but James likes Shay and wants to see where it could lead.

With Shay’s her ex-boyfriend stalking her and getting death threats Shay’s life is in turmoil. Being the independent woman she is she doesn’t want to bother James with her problems but it may cost her her life.

I had great hopes for this book as it sounded so good but unfortunately it didn’t come close to meeting my expectations.

The start of Shay and James’s relationship was supposed to be this lust/attraction that they couldn’t deny and that’s why they ended up sleeping together when they really didn’t even like each other. The problem for me was that even when they started kissing because they just couldn’t help themselves I was stunned as I didn’t feel that the author had cultivated the attraction enough to make it believable. The fact that James wanted to continue to see Shay surprised me even more as she seemed more than a bit mentally unstable. I just didn’t believe any of it.

Shay’s past plays a huge roll in the story as it came down to people believing her when she tells them things. That past stops her from making strides against her fear of her ex and moving on. She lets people walk all over her and it kind of pissed me off that she didn’t try harder at times.

The other part of the story had to do with the woman who actually stole Bogart from James and tried to have him put down. She was a nasty piece of work and started a shit storm because she was incredibly selfish. The problem I had with her was that I didn’t believe her grudge against James. I didn’t think that the reasons behind her theft of Bogart was justified and they seemed pretty lame.

In the end I can’t say I’d recommend this book. I didn’t hate the style of writing, but the story itself was a bit too convoluted for my liking. The best parts of this story were definitely James and Bogart – I just couldn’t figure out why they were with Shay.