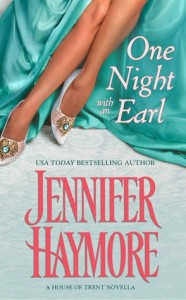 Beatrice Reece, Lady Fenwick, has retired from polite society. Everyone knows her late husband treated her abominably, and she simply cannot bear the whispers of the ton. But it's the night of London's premier masquerade ball—and Beatrice's one chance to revel in anonymity. She hopes no one will recognize her beneath her mask, not even the sinfully sexy stranger across the room who holds her captive in his gaze.

Andrew Sinclair would know beautiful Beatrice anywhere from the gentle sway of her hips, the richness of her hair and the lushness of her body. When he asks her to dance, the attraction is instant and all-consuming. The only woman he's ever truly wanted is finally in his arms. But when the clock strikes twelve, will this one reckless night fade into the morning light?

After two years in seclusion Beatrice is ready to head out into society. Well, almost head out. She’s heading to a masquerade ball so no one will actually know it’s her. She’s been told by her parents not to show her face and she believes that after two years the scandal will come out once again. Despite that she decides to head to the ball with her friend Jessica and make the most of the time she has out.

Once at the ball she’s having a wonderful time but things improve tremendously when a masked stranger comes up and starts talking to her. They hit it off marvelously and Beatrice is incredibly attracted to the masked man. As time goes by Beatrice decides that this might be her last chance to be daring and when he takes her back to his home she knows she’s made the right choice.

Drew sees Beatrice at the masquerade and knows immediately that it’s her. He was in love with her years ago and planned on asking her to marry him but unfortunately her betrothal was announced before he could get his ducks in a row. He doesn’t like not telling her that he knows who she is but she’s so skittish he decides to go along with it. Once she’s in his bed, however, he can’t hold himself back from swaying her name. Unfortunately a misunderstanding and Beatrice’s horrible parents may ruin the new budding relationship.

I’ve only read one other novella by Haymore and I didn’t love it. Because of past experience I was a bit leery to get into this one but I love stories that involve masquerade balls. I’m so happy that I decided to read this one!

Beatrice, the poor woman had been caught up in a scandal – not of her making. Her parents had taken her in but hadn’t let her forget the scandal for a moment. They were horrible but I’m really glad that Beatrice decided to defy them for one night and head out to the ball. The story of Beatrice meeting the masked man was sweet and I really loved their time together as they just hit it off from moment one.

I really liked Drew a lot and I very much wanted him to tell Beatrice who he was. I understood, however, why he didn’t because she would have taken off and he would have lost time with her. What he did after Beatrice was at his house was awesome. He didn’t hesitate for a moment to go after her and I loved him more for it.

Overall I found the story was charming and I loved the Cinderella-esque feel to it.