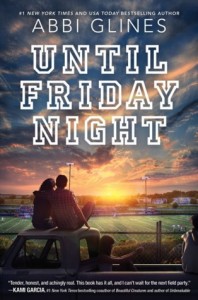 To everyone who knows him, West Ashby has always been that guy: the cocky, popular, way-too-handsome-for-his-own-good football god who led Lawton High to the state championships. But while West may be Big Man on Campus on the outside, on the inside he’s battling the grief that comes with watching his father slowly die of cancer.

Two years ago, Maggie Carleton’s life fell apart when her father murdered her mother. And after she told the police what happened, she stopped speaking and hasn’t spoken since. Even the move to Lawton, Alabama, couldn’t draw Maggie back out. So she stayed quiet, keeping her sorrow and her fractured heart hidden away.

As West’s pain becomes too much to handle, he knows he needs to talk to someone about his father—so in the dark shadows of a post-game party, he opens up to the one girl who he knows won’t tell anyone else.

West expected that talking about his dad would bring some relief, or at least a flood of emotions he couldn’t control. But he never expected the quiet new girl to reply, to reveal a pain even deeper than his own—or for them to form a connection so strong that he couldn’t ever let her go…

Abbi Glines writes the kinds of books that drive me crazy. Her love interests start off as complete pricks but if you can get past their punk ass attitudes and shitty behavior in the beginning, they really turn their shit around. That was the case with West Ashby.

Maggie Carleton doesn’t talk. She hasn’t said a word in years, communicating through pen and paper. She hasn’t talked since her father was put away for killing her mother. A murder she witnessed. As you can guess, that whole situation has traumatized her and she survives by not speaking. She doesn’t want to talk about that night, she just wants to move on and she doesn’t want to become a burden to anyone so she keeps to herself. When she moves in with her Uncle and his family, she knows that her cousin (who is the same age as her) isn’t going to like having her tag along everywhere he goes. He’s a total dickhead to her when she first comes around and Brady (that’s his name) really got on my nerves throughout a whole lot of this book. He warns his friends off of his cousin but mostly because she’s “not right in the head” as he tells them. There were so many freaking times when I wanted to punch Brady’s lights out.

West wasn’t safe from my rage too. When we first meet him, he’s a complete asshole and his father having cancer and him being scared about all of that didn’t excuse his behavior for me. Oh hell no. I’m not even sure why I continued reading this book but more than anything, I was curious. I was curious to see when and how and why Maggie would start talking again and I wanted to see how far Logan would grow on me.

Abbi Glines did a great job of turning things around because I was invested from beginning to end…even when I was pissed to high heaven at West for being such a complete jerk. Brady too.

I liked that despite not talking, Maggie is portrayed as strong. She’s a survivor and her story was one that pulled at my heart strings. I loved the connection she formed with West and I loved seeing her stand up for herself when things between her and West weren’t to her liking. I loved seeing West grow from the asshole jerk in the beginning to the guy he was in the end because he ended up being a real one.

There’s a lot of growing in this book and I’m glad that I finished it because this book made me mad, it made me sad and it made me laugh. All things that I love while reading a book. This is a book that stayed with me after I finished the book and I’m crossing my fingers that we’ll get more from this group of characters. I’m looking forward to seeing the other boys stories, especially Brady.

This book is available from Simon Pulse. You can purchase it here or here in e-format. This book was provided by the publisher in exchange for an honest review.