They couldn't be more opposite, the Hollywood actor and the hometown girl, but all they need is a little convention magic to become the perfect ship in Cathy Yardley's One True Pairing.

Jake Reese needs a decoy girlfriend. Fast. The lead actor of the popular TV show, Mystics, is tired of losing his shirt to overeager fans. Literally. Which is why a chance meeting with gothabilly bookworm-slash-barista Hailey Frost seems almost too perfect to be true. Hailey is not impressed with his TV fame and is desperate to save her family's bookstore. It's a match made in Hollywood, but as the two pretend to date, fan fiction becomes reality. Can this OTP become canon?

I was absolutely charmed by Cathy Yardley’s Level Up when I read it last year, so I was beyond excited that her series was picked up by a major publisher and that there was a new book coming out. I didn’t love One True Pairing as much as Level Up, but I had a great time reading it.

In Level Up, we met the sisters running the failing bookstore, and this book focuses on one of those sisters, Hailey Frost. The sisters are barely keeping their head above water, and Hailey is hustling in every way she can to keep the bookstore open, mostly so that her agoraphobic sister Cressida won’t be forced to move. If you read Level Up, you’ll remember that the women all love a show called Mystics, which is frequently compared to the real-life show Supernatural. Jake Reese is an actor on the show, and when Hailey meets him by chance, she concocts a plan to get his help to give the store publicity. Jake needs Hailey’s help, too. He is worried his contract for Mystics won’t be renewed, and his agent suggests that getting himself out there more would help. Hailey offers to help him increase his popularity if he helps her save the bookstore. Of course, things don’t go as smoothly as either one expects, and both of them have to figure out how to overcome their fears to move forward.

Hailey is a great character. She’s tough and totally devoted to her sisters, but she’s put her own needs aside for years in an effort to take care of them. Unlike so many romance characters, Hailey lives paycheck to paycheck. She worries about money, about healthcare, about what to do when she loses a job. It’s kind of refreshing to read! She is absolutely, totally terrified of relationships, however, and when she starts having feelings for Jake it freaks her out. Jake, though, is my favorite. He is an absolute sweetheart, and I loved that he was so ready to be the kind of partner Hailey needed. I really enjoyed reading about the conflict with his dad as well. His dad was a major Hollywood star, and he had a lot of expectations for how his son’s career should go. You can tell Jake has tried so hard to do what his dad wanted because he just wanted his dad’s love. In reality, though, Jake was just a nice, geeky guy who enjoyed being on Mystics because it was fun and fulfilling, and he needed to give up trying to meet his dad’s expectations of fame and stardom. I wanted to give him a giant hug.

For the most part, the conflicts in the book are realistic. Jake is wary at first about Hailey’s motives, as he should be. In fact, she really IS using him, and I didn’t love that. She wants him to promote her bookstore, and I couldn’t help feeling a little bad that while Jake genuinely wants to get to know her, she wants something else from him. Of course, she is helping him with his PR problems too so it’s not all one-sided, but Jake was such a sweetie that I felt a little protective of him! Because Jake is a genuinely nice guy, the time where he punches someone felt extremely out of character for him, and I thought it was an unnecessary inclusion. Jake could have handled the situation in a million other ways. Still, it was a small blip in an otherwise consistent story.

While I think everyone should read Level Up because it’s so great, you don’t have to read it to enjoy One True Pairing. It’s a smart, modern story and I loved it. 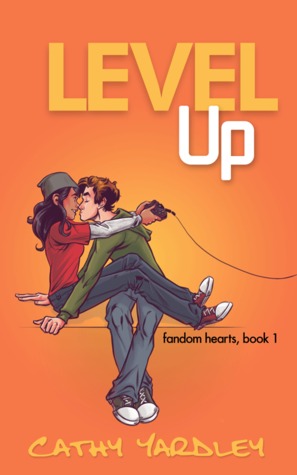 Geeky introvert Tessa Rodriguez will do whatever it takes to get promoted to video game engineer– including create a fandom-based video game in just three weeks. The only problem is, she can't do it alone. Now, she needs to strong-arm, cajole, and otherwise socialize with her video game coworkers, especially her roommate, Adam, who’s always been strictly business with her. The more they work together, though, the closer they get…

Adam London has always thought of his roomie Tessa as “one of the guys” until he agreed to help her with this crazy project. Now, he’s thinking of her all the time… and certainly as something more than just a roommate! But his last girlfriend broke up with him to follow her ambitions, and he knows that Tessa is obsessed with getting ahead in the video game world.

Going from friends to something more is one hell of a challenge. Can Tessa and Adam level up their relationship to love?

Full disclosure: At the time I read this book, it was free on Amazon and Barnes and Noble. I didn’t get any special treatment, but I didn’t pay for it.

Let me get straight to the point: I freaking LOVED this book. I had such a good time reading it! And is that cover not the cutest? I would like a print of that thing to hang on my wall because…gah, adorable!

Tessa works for a video game company as an audio coder, which is a relatively menial job in the scheme of video game creation, but she’s hoping to leverage her foot-in-the-door and become a game engineer. Her roommate Adam is already a producer at their company, so when a job opens up on the engineering team, Tessa tells Adam she wants his help getting it. The problem is, Tessa has never made any effort to make friends at the office, and Adam tells her that unless she puts herself out there more and tries to fit in with the all-male team in engineering, she won’t have much of a chance at the position. In an effort to get a social life, Tessa kind of inadvertently makes friends with a group of geeky women in her neighborhood, and she concocts a crazy plan to help her new friends out of a huge jam. She needs Adam’s help for her plan to work, but as they spend more time together they start to realize that maybe they’ve both been missing what was right in front of them.

I stumbled on this book purely by chance, and boy am I glad I did. This book was so much fun to read! Tessa and Adam are awesome characters on their own and an even more awesome couple together. Tessa is a Latina geek girl in her mid-twenties, focused on her job and on the various fandoms she participates in. She really doesn’t even talk to Adam much–she only moved in with him because he needed a roommate at the same time she needed a room, not because she was friends with him. People at work don’t dislike Tessa, but they also don’t know her, and as she learns near the end of the book, her reticence to engage in any social interactions at work has genuinely hurt her professional opportunities, not to mention made her life quite lonely. But Tessa isn’t a pushover or weakling. Her industry is almost entirely dominated by men, and she has had to fight at every step to get jobs and respect. It’s made her driven and tough and blunt, and it made me love her.

Tessa’s toughness is tempered by Adam’s sweetness. He’s a beta, my favorite kind of hero. I love that he treats Tessa with so much respect–he isn’t afraid to stand up for her publicly when needed, but mostly he just offers her his unconditional support as she stands up for herself. Plus, a guy who isn’t afraid to repeatedly talk about consent is always sexy in my book! These two had some serious chemistry, and I loved the way they started noticing things about the other and reacting physically before their brains had totally caught up. It is a little unusual that these two crazy kids lived together for a year before they noticed each other, but given that Tessa tried to hard to stay to herself made me buy in. I could believe that Adam would have left her alone if that’s the vibe she had been sending out.

The other thing I loved about this book is the geekiness. I’ve read books with similar themes where there is a lot of info dumpy, “see how much geeky stuff I know?” exposition. Here, I thought the gaming/TV/comics/etc references were mostly authentic and integral to the characters, not just name-dropping. Yardley seems to know her geek culture and gets the details right. It was fun and interesting without pandering.

This is a relatively short book, and while I felt that the story arc was complete and the characters were clear, the plot and characters are not extremely complex. I would have especially liked to see more interaction between Tessa and her new girlfriends–I hope we get every one of their stories because they were a blast. Lack of complexity isn’t a criticism from me, but if you prefer in-depth explorations of complicated characters and emotions, this book may not be top on your list. I did also feel like the book got off to a bit of a slow start, though once Tessa and Adam start noticing each other things picked way up.

These are nitpicky justifications for why I’m not assigning a 5 out of 5 grade, because I came close! I enjoyed the hell out of this book. The book isn’t angsty and is fairly light on conflict. Instead, it’s a funny, sweet story with lovable, diverse, smart characters, and I can’t wait to read more of this series.