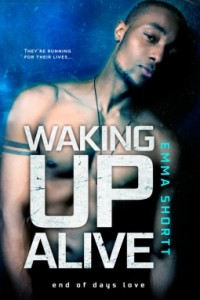 After surviving the zombie apocalypse for two years, Tye LeBow never expected to be saved from a hungry gang of zombies by a geek with a bad attitude and a penchant for explosives. Tye can’t quite work out why scientist Polly Parker saved him. She doesn’t want his protection, and she certainly doesn’t want his company. But Tye has no intention of leaving the beguiling geek behind.

Polly doesn’t want to leave her home, but when the wakers begin to show signs of a burgeoning intelligence, heading south is the only option. With a car packed full of homemade explosives, and Tye’s very large axe, they are ready for the road trip of their lives.

Bombs and blades aren’t the only keys to survival–they’ll need to rely on each other, in a way that neither could have imagined…

Tye has been holding his own in the zombie apocalypse. He met his friend Jackson two years after it began and they’ve stuck together. Unfortunately, they get separated when running from zombies while in Chicago and that’s when Tye meets Polly.   Polly is a mathematician and when everything started going to hell a couple of years ago she holed up in her office building and she’s been quite safe. She should have left Chicago a long time ago but fear has kept her in place. She doesn’t want to trust Tye but forces herself to see him as a good person and it manages to work out.

Tye and Polly end up leaving Chicago together to head to the survivors camp that is near Laredo Texas. When they get near to it they end up in a zombie horde and Polly gets bitten by a zombie. The doctor at the camp has been working on a cure to the virus that is causing the zombieism and with Polly’s antibodies he may have done it. That doesn’t make Tye happy that Polly is now a zombie and that he may never get her back.

The story of Tye and Polly was a good one. I think you definitely have to read Jackson and Luke’s story in Waking Up Dead before starting Waking Up Alive. I don’t think you can fully grasp the situation or the thoughts behind the virus or the doctor’s “almost” cure unless you do. The story was good but can’t, imho, be read as a stand-alone novel.

Tye and Polly were a sweet couple together. I really liked the first part of the book when they meet and start to fall in love. You can see it as two friends falling in love and though it happens slowly and in definite stages it was no less touching. Polly and Tye were opposites but meshed well. I liked how Tye helped Polly with her fears and he supported her ideas with respect. He saw her as brave when she didn’t see that in herself.

The second part of the book was a good but a bit disappointing in the romance department. It had Polly as a zombie and we got weird Polly-zombie dreams which were quite strange and Tye going out to kill zombies cuz he couldn’t be with Polly. That was all good and it worked well for the cure but it didn’t really work for enhancing the romance between the two. The end was sweet but didn’t quite make up for the lack of romance in the second half of the book.

Despite my issues with the romance I still thought it was a quite enjoyable read. The descriptions of the zombies was appropriately disgusting and the action scenes were well done. Overall a decent read and one you won’t want to miss especially if you’ve already read Waking Up Alive.

Waking Up Dead
Waking Up Alive 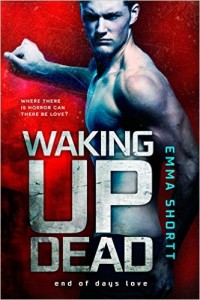 You know your life has hit rock bottom when you’re living off cooked rats and showering once every few months—if you’re lucky. But for Jackson Hart things are about to get a whole lot worse. When her best friend, Tye, disappears hunting for food, kick-ass Jackson’s ‘head south to safety’ plan looks like it’s dead before it’s even begun. But then she meets ex-mechanic Luke Granger, who takes her to his bunker, feeds her with non-rat based food, and offers her protection against the zombie hordes—not that she needs it. She knows how to use a machete and isn’t afraid to.

Jackson was tempted to stay in the city with her rescuer. Food, shampoo and the possibility of finally getting laid, what more could she ask for? But the flesh eaters are getting smarter and the bunker is compromised, so Jackson and Luke have no choice but to make the journey south.

Luke and Jackson team up to find other humans in a road-trip romance for the ages. They travel for thousands of miles with zombies shadowing their every move. They must utilize every resource at their disposal…and then some. On the way, they discover that even if flesh eating zombies are knocking down their door, there’s always time for sex and even love.

It’s been 2 years since zombies started taking over the world. Jackson is one of the ones who has survived and she’s done that by taking all emotion from her life and doing what she needs to do in order to live. She met Tye and they had been traveling together and landed in Chicago. They get separated and Jackson ends up meeting Luke who has had it pretty good as he found an underground bunker early on. Luke and Jackson stick together and when Jack tells Luke that she’s headed to a survivors camp in Laredo, Texas that she heard about he decides to go with her.

As they travel they become closer and basically fall in love although Jackson’s not about to admit that and let emotion rule her. When they arrive near Laredo and find more than what they hoped for, Luke thinks that life can be “normal” now but it might have been too long that Jackson was on her own and she might not be able to handle “normal” at all.

I’m the first to put my hand up when anyone asks who likes/watches The Walking Dead on tv. I love that show! What I like so much about it is the interpersonal relationships between the characters and how they treat each other, react to different situations and of course, deal with zombies. When I saw Waking Up Dead on NetGalley I grabbed it because I was hoping that it offered the same kind of thing and it certainly delivered!

Jackson and Luke are wonderful together. No, they didn’t fall into each others arms right away although I could tell there was attraction there. They dealt with each other well but as much as Jackson tried to keep emotion out of her life it was there whether she wanted it to be or not. Luke had had it pretty good with living in the bunker for so long and he hadn’t been walking/traveling for two years like Jack had. He was good for her in that he forced her to look at life differently and while she didn’t like that she allowed it. I loved the communication between the two and I loved watching the blooming romance between the two.

The end of the book was exciting and action-packed (as is the rest of the book) and quite touching. I loved the end scene(s) and can’t wait to read the next book, Waking Up Alive, when it comes out.

If you are one, like me, who loves a great post-apocalyptic romance then this book is definitely one you’ll want to pick up. I don’t think you’ll be disappointed.