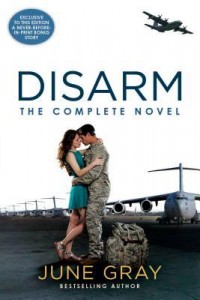 When the secrets of the past begin to surface, the truth can be disarming

Twenty-six-year-old Elsie Sherman has had a crush on her brother’s best friend, Henry Logan, since she was twelve years old. Unfortunately, Henry—now an Air Force officer—has only ever treated her like a younger sister, stepping into her brother’s shoes after he was killed in action.

That is, until the night when one dance ignites a sensual fire between the two, leaving Elsie aroused and confused. Is she allowed to lust after her surrogate big brother, who also happens to be her roommate? As the passion between them crosses the line into a territory that teases with the forbidden, Elsie decides to give herself to the man she has always desired. But Elsie is not prepared for where the relationship will take her.

Henry has been harboring two secrets. One can bring them closer together. The other will tear them apart. Now, with each startling new revelation, Elsie realizes that only she can decide if the past can ever be forgiven—and if a future with Henry is worth fighting for.

Elsie Sherman has been in love with her brothers best friend since she was 12 years old. Despite the more intimate feelings she had when she got older, Elsie and Henry have become really great friends. In fact when Elsie’s brother heads to Afghanistan, Elsie takes over as Henry’s roommate.

One night at a nightclub Henry and Elsie have a “moment” and that changes everything. A few days later they sleep together and Henry tells Elsie that he loves her and has loved her for years. Right after that, however, Elsie finds out that Henry’s getting sent to Afghanistan – which is where her brother was when he was killed. Obviously Elsie is scared to let go but they get through their goodbyes.

Elsie survives the 6 months that Henry’s gone but when he returns he’s not the same. Their love goes from a relationship with a future to no relationship at all as Henry feels that he needs to be away from Elsie in order to find out who he is. When he finds out he’s back to claim her but Elsie’s been so broken-hearted that she may not take him back.

This novel started out as a 6 part serial. I have to say that I’m darned glad that I read it all at once because I’m not a patient person when it comes to finding out what happens next! 🙂 l Having all of the stories at my fingertips felt more like reading one long novel rather than separate stories and I really enjoyed that.

The story itself is such an emotional roller coaster. I wanted to hug Henry at one point and then hit him at another – then I was back to hugging…then hitting. You get the idea. He really was a great guy but with all he’d been through in his life he was a bit messed up. I understood his desire to find himself I just think he went about it in a way that was extremely hurtful to both him and Elsie and felt it could have been accomplished another way. I’m glad he went back for her, but the hurt he’d caused was almost insurmountable.

Elsie was, imho, a typical girl. She lived and loved and was a bright, friendly woman. I loved the banter that occurred between Elsie and Henry as it showed me the depth of their friendship. My heart ached for Elsie when Henry made his decision to break up with her, especially as the night before he’d been talking about being with her forever. When Henry comes back into her life I was happy to see that though she still loved him she didn’t take him back right away. How could she trust that he’d not up and leave again?

The ending was quite satisfying and I loved the last scene of the book – it was sweet and touching and I thought it was really done well. In the end I really liked the overall story and the writing.

Now, that being said…I read the bonus short story that was included that was about Henry and Elsie on their honeymoon. While at the end of the book I was definitely feeling the HEA this story made me doubt things and think that maybe it was just a HFN – pooh! In the short Elsie is once again doubting her trust in Henry. If she doubted him then why did she marry him! Ug. I admit I was a bit frustrated. Though the story is fun and cute it I kind of wish I hadn’t read it. sigh lol