Series: Claimed by the Highlander In the Highlands of Scotland, danger and desire can be found anywhere—but finding them may lead to something much more perilous and passionate than anyone can handle.

Lady-in-waiting Caitrina de Montfort is in a terrible bind. With her sister held captive by a henchman of Edward Longshanks, she has been forced to spy on the dowager queen of Scotland. But the resourceful young noblewoman has a plan to set her sister free—until the arrival of a charming but steely-eyed courtier ruins everything.

Bran MacLean has made his living by his wits for most of his life. After stealing a valuable treasure, he evades pursuit by donning a disguise and joining the queen's retinue. All goes well until the lovely Caitrina pilfers his loot and demands his aid in rescuing her sister. But their enemy is ruthless—and they soon find themselves facing a desperate choice between love and survival...

Caitrina de Montfort is in a bit of a pickle. She has been recruited – under duress – into working for Edwards Longshanks and giving information to his henchman, Giric, about Queen Yolande of Scotland. She doesn’t want to, as she’s a Scot and giving the English secrets goes against everything she believes in, but they have her 15 year old sister held captive and she’s not sure what to do. Now not only is Giric demanding secrets, he wants Caitrina to actually steal the queen’s baby once she has it! Caitrina’s at her wits end until the new Marshal shows up at the manor where the queen and her entourage are staying.

Bran McLean is a thief. He’s not a man who has taken to stealing just to feed a family – he was pretty much raised to be one and he kind of enjoys what he does. He’s not always proud of the choices he makes when doing it but he soon manages to quiet his conscience. When the story begins he is riding to get away from the MacCurrans because he has stolen a crown that is precious to them. He decides to hide out and ends up playing the part of Giles Gordon, the new Marshal. He manages to pull it off without anyone the wiser until he decides that the manor is not a good hiding place for the crown decides to store it someplace other than his room in the manor. Caitrina happens to find it and deduces exactly what Marshal Gordon is – a fraud.

Caitrina then uses the crown as leverage to get Bran to help her with her sister. He agrees but knows that once he completes his initial task there will be more and more that Caitrina wants from him. As time passes, however, Bran finds that he loves being around Caitrina. Though he finds her a bit deluded as to what type of man he is, he also discovers that he wishes he were a better man so that they could be together.

What a Lass Wants was a different kind of story as we have a thief and a lady’s maid falling in love. It was unusual because Bran wasn’t really hero material when the book started and even throughout he wasn’t necessarily happy with the help he was giving Caitrina. That didn’t stop him from trying to be all that she wanted him to be. They fell in love even though the odds were stacked against them, knowing that they could never be together. I loved that neither actually expected an HEA. Though it was sad, to say the least, it was lovely to read about the love between the two of them.

Caitrina was a strong woman, no doubt about it and she played off of Bran’s character perfectly. The two were kind of a yin and yang despite their many differences. The story of an underdog like Bran coming into his own and liking the person he could be was definitely intriguing and quite entertaining.

I’ve really enjoyed Keats’ writing and this series so much. I’m looking forward to reading more from her in the future. Shunned by her village, weaver Morag Cameron lives a solitary existence in the woods—until the night she finds a sorely wounded Highlander by the loch. Under her care, the handsome warrior slowly recovers his strength, but his memories have disappeared. Morag is torn. For if she helps him regain his past, she may sacrifice a life with the man she has come to love...

Wulf MacCurran wants nothing more than to claim Morag as his own, but his past holds too many dangerous secrets—secrets that put them both in mortal danger. He must discover who attacked him and left him for dead. Traveling to Edinburgh, Wulf and Morag find themselves swept into a mystery with the power to determine the fate of their passions—and change Scotland forever...

Morag has no desire to travel with Wulf to Edinburgh but he’s worried for her safety so she finally relents. They go under the guise of selling her cloth which she weaves but things don’t exactly go their way. The person they enlist to help them instead shares their whereabouts with the one man they are seeking. This wreaks havoc with their plans and soon Morag and Wulf are fighting to stay free and together as well as fighting for their lives.

Morag believes that even if Wulf says he loves her that he will eventually leave her. She has been shunned as a harlot and he is cousin to the Laird. She knows that their time together is short but she wants to make the most of it that she can. Wulf knows that he loves Morag and no matter what happens he WILL be with her.

I really enjoyed this third installment in the Claimed by the Highlander series. It was a sad story at times but as everything worked out in the end it was all good.

I loved Morag and Wulf together. I thought that the pair were both incredibly stubborn and that made their pairing all the better. They were each willing to fight for what they wanted. Morag was an incredibly strong woman after all that she’d been through and I admired her inner strength. Wulf had been dealt a hard blow by life but he hadn’t given up – even without his memories.
The intrigue in this story was quite good and I was happy to see things resolved for those involved.  I’ve really liked Keats’s writing in her first three books and look forward to reading more of her work in the future. 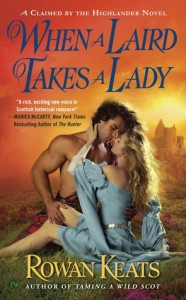 Isabail Grant has had to be strong all her life. Over the years, she has lost everyone close to her, and now she’s seeking justice for her brother’s murder. But en route to Edinburgh to petition the king, she is kidnapped by a fierce warrior—and is shocked to find herself irresistibly drawn to her captor.

Aiden MacCurran is an outlaw. The laird of a small clan, he’s been falsely accused of killing the king’s courier and stealing the Crown’s property—and the key to clearing his name and redeeming his clan lies in Isabail’s memories. But Aiden and Isabail must first weather deceit and treachery before they can find the truth and claim the love that’s growing between them.

Isabail is on her way to Edinburgh when her party is attacked. Some of her guards are killed, some are left alive but the only ones that are taken are Isabail and her maid, Muirne. Isabail doesn’t have a clue as to why she’s been taken but soon discovers that the Laird wants information. He’s accused of stealing from the King and he and his people are run out of their homes – a ton of them killed. The Laird, Aiden MacCurran, wants the info that he feels sure that Isabail has so that he can get to the bottom of who actually stole the necklace, as he did not, and clear his name. He takes Isabail to the place that some of his people are staying and lets her know that as soon as she hands over the info he’ll let her go.

Isabail doesn’t believe that Aiden will let her go (she thinks he’ll kill her instead) and refuses to give him the info he seeks. A day or so after she’s kidnapped a man who used to be her deceased brother’s lover shows up. He asks her to search for the missing necklace and has her believing that maybe Aiden was the thief – except, he has honor and she’s torn as to who to believe. When matters come to a head she’s betrayed by someone she believed to be a friend and almost killed.

Rowan Keats certainly knows how to spin a story. She did a great job with WaLTaL and I enjoyed every minute of it.

Aiden and Isabail are perfect for each other and their interactions were mostly serious yet sexy. The romance in the story took a back seat to the intrigue but it was still wonderful. It seemed that neither Isabail nor Aiden were afraid to put themselves out there and their hearts on the line and it made for a very open and communicative relationship.

The intrigue was a bit confusing at times – especially in the begining – and I was sad that some of the story was left open-ended as Aiden never actually cleared his name. I would have loved to see that done but maybe the author has another story that will let us know what happened. Overall it was a good medieval romance.