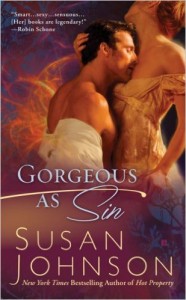 Fitz Monckton, Duke of Groveland, has never encountered a woman he can’t seduce—until he clashes with the beautiful Rosalind St. Vincent, whose bookshop sits in the way of Fitz’s lucrative development deal. If money won’t entice Rosalind to sell her shop, Fitz must tempt her in other ways—hopefully mutually pleasurable, and profitable to them both.

It’s 1891 and the Duke of Groveland is looking to develop some townhouses. The problem is that there’s one woman, who owns a bookstore that is stopping him. His barrister, as well as many others, have tried to pay the woman, Rosalind St. Vincent, off but she’s just not budging. The Duke decides that since he’s such a ladies man that he can get her to take the money and run. The problem: even he can’t make her move, even for an unheard of amount of money.

Rosalind had opened the bookstore and she’s quite happy with both her sales, her customers and most of all her location. Despite the fact that the Duke has offered her an amazing amount of money, and she’s in debt and would like to travel, she turns his offer down.

With a pretty simple premise this book wasn’t one I could really get into and it just didn’t do it for me. The Duke was a pompous ass and to me never really redeemed himself. Rosalind I understood a little better because she was standing up for what she believed in, her bookstore, and not giving in.

The problems for me began early in the book with the Groveland and Rosalind meeting one morning and hating each other and then by that night sleeping together. Only to wake up the next morning and hate each other again. Ugh. Don’t get me wrong, I understand lust just as well as the next person but I thought it detracted from Rosalind’s stand on her belief’s to do that. Later in the book there’s another scene involving the Duke (don’t want to give anything away) that really ticked me off and that just kind of sealed the deal on whether he was good enough to be hero material. IMHO – he didn’t make the grade.

Now that being said the writing of this book was pretty good but the story was lacking for me.