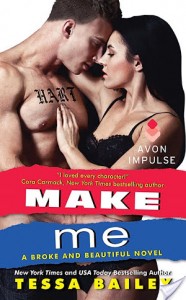 Construction worker Russell Hart has been head-over-work boots for Abby Sullivan since the moment he laid eyes on her. But he knows a classy, uptown virgin like her could never be truly happy with a rough, blue-collar guy like him. If only she'd stop treating him like her personal hero—a role he craves more than oxygen—maybe he could accept it.

With the future of her family's hedge fund on her shoulders, Abby barely has time to sleep, let alone find love. And her best friend Russell acting like a sexy, overprotective hulk any time their Super Group goes out in public definitely isn't helping her single status. But after a near-tragedy lands Russell in her bed for the night, Abby's suddenly fantasizing about what he looks like shirtless. Chest hair and tattoos—who knew?

As Russell struggles to keep Abby at a safe distance, she begins to see through his tough-talking exterior—and acknowledge her own feelings. Now she's ready to turn the friend-zone into foreplay…and make him lose control.

I’m really late to this party because by the time this series made it to my radar, it was because of this book. The last book in the series. Sigh.

So, this is the final book in the Broke and Beautiful series by Tessa Bailey and it follows two parts of the Supergroup as they make that journey toward true love…with each other. Russell and Abby are friends. Best friends even. But Russell is in love with Abby and he’s firmly stuck in the Friend Zone, which is exactly where he’s going to stay because in his eyes, Abby is too good for him. He’s got nothing to offer her and she deserves the world. They come from different worlds and Russell won’t let himself go there with Abby.

Abby is oblivious to Russell’s feelings for her but nobody else in their supergroup is. Abby has her own issues that she’s trying to work through. The main one being taking over her father’s billion dollar company. She’s stressed out all of the time because taking over her father’s big ass company at age 24 and making executive decisions about everything is starting to get to her and who could blame her? She’s so freaking young.

Russell is stuck in the friend zone until Abby wakes up and realizes that she wants him…and then she goes after him and Russell knows he should stay away but can’t because, it’s Abby.

I’m all about New Adult books and this book had a lot going for it. I enjoyed the dynamic between everyone in the supergroup. They were all coupled up anyway so it was only a matter of time before Russell and Abby got together too…especially since Russell had it so bad for Abby. I liked that. I liked that it was Russell that was pining for Abby and not the other way around. I also liked that once Abby became aware of Russell like that…she didn’t shy away from him. Even with all of her inexperience, she was upfront with Russell.

Russell, on the other hand kind of drove me nuts. Don’t get me wrong, I adored him. He was hot and he was a great guy but all of that hot and cold shit he threw Abby’s way pissed me off. I kept waiting for him to get his shit together.

My issues with Russell were the exact same issues that Abby had with him, when everything is out in the open. I loved that she stood up for herself and let Russell know that he robbed her of decisions he had no right to rob her of and I loved that she made sure he understood that she wouldn’t tolerate that shit from him. I loved that she wanted him to accept ALL OF HER and not just the stuff he was okay with.

Despite my issues with Russell and the way he handled Abby, I enjoyed this book. I enjoyed getting to know the other characters from the previous books. I enjoyed seeing both Russell and Abby grow and learn and just come into themselves. I thought Bailey did a great job of writing Abby and Russell’s story. It was an entertaining way to spend a few hours and I’m going to get the other books and start this series from the beginning.

This book is available from Avon Impulse. You can purchase it here or here in e-format. This book was provided by the publisher in exchange for an honest review.