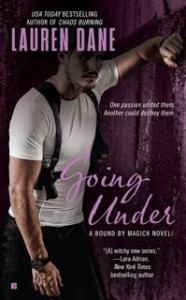 In the wake of the Magister’s rampage, chaos rules. Left reeling, the Others and the humans scramble to create a some sort of unity in the face of growing unrest and violence from anti-Other hate groups federation—and ruthless PR guru Molly Ryan is the witch who can do it. She grew up in the human world but there’s nothing left for her there. She’s lost her PR firm, her friends and she’s decided to put all her fight toward aiding the Others in this dark, new reality. If there’s anything left for her there, she’s going to fight for it. But Gage Garrity, one of the few Others who survived the massacre, fears that the crusade will expose Molly to greater dangers than ever before.

Now, together, with magick on their side, they’re on the road in a desperate struggle to unite a torn world. From state houses to television news to legislative conference rooms across the country, they’re fighting the good fight. And it’s bringing out a passion in both of them they never expected—one as volatile, intense, and all-consuming as their relentless battle for world unity. A battle that could be their undoing…

The Magister has come and gone – been defeated by Clan Owen. Now witches are known to humans and all hell is breaking loose. Groups like PURITY are calling the paranormals “Others” and outing them on tv shows and websites. No one is safe.

Molly is a PR person with a human mother that didn’t know she was a witch until she was 13 years old. She hasn’t hidden who she is but she hasn’t broadcast it either. Now the PR company that she helped build is firing her for being a witch. She wants her job but knows there’s no way she’ll be able to go back to the way things were. After seeing a show that hosted Meriel Owen in an interview Molly decides that being the face of Clan Owen is what she needs to be. She contacts Meriel, offers her services and after a thorough background check and an interview she starts her new job in Seattle.

Immediately Molly is thrust into defending the Others from attack and humans saying that they should be killed, put in camps, tagged with GPS chips, sterilized and much more. Not all humans are saying this but the ones who don’t feel this way aren’t speaking up and being heard. It’s tough going but Molly is pretty much made of steel and works her magic on crowds around the country. She still needs a bodyguard though, especially after her first death threat. Though she’s assigned to Faine at first, Gage Garrity soon makes excuse after excuse to be the one that guards Molly. Molly and Gage become friends and then lovers but neither is looking for more. Don’t they say (whoever they are?) that things happen when you’re not even looking for them to? Yep, that’s the case here.

This book was a bit different from the other two that preceded it. I think in this story, while there was definitely a romance going on, the main part of the story was the struggle of the Others and what they have to go through to survive.

Terrible, and I mean horrible things happen to Others all over America and its heartbreaking. I have no idea what America would do if we actually found out there were witches and other paranormals all over the place but I would hope and pray that it would look nothing like it did in this book. shudders The Others try to deal with the tragedies and Molly keeps telling the Other groups (weres, vamps and witches) to hang in there but eventually even Molly realizes that by trying to talk to the people that they’re getting nowhere. They don’t want to show force but they don’t want to be thought of as weak either.

While all this is happening we see Molly and Gage who are travelling with each other whenever Molly has a speech or a meeting. They’re great together…to a point. Gage is pretty messed up from what’s happening and while both of them realize that they can be “real” with each other, be truthful and tell it like it is, Gage seems to take this a step further and at times is really quite mean to Molly when they argue. I didn’t like that about him at all and at times I wanted to crawl in the book and hit the man. The romance was a new friends to lovers story but there was nothing truly explosive about it that made me sit back and sigh. It was kind of like I knew they would have their issues but wasn’t real concerned that they might not end up together. Unfortunately this wasn’t a plus. Yes, it was nice, but the story definitely concentrated more on the plight of the Others than Molly and Gage.

I do want to see what happens next in the world that Dane has created.   Hopefully things will settle down for the Others and we’ll get another great romance like we did in the first 2 books.