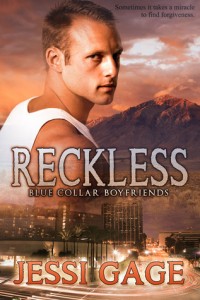 Divorced construction worker Derek has anger management issues. Acting rashly on the freeway, he causes an accident. His truck escapes unscathed, but he can’t say the same for his conscience. Visions of the wreck haunt his dreams, but they’re always followed by the sweet caresses and soothing words of a beautiful woman who calls to everything male in him.

Cami assumes she is dead. With no memory of her past, all she knows is endless fog and the occasional visit to a darkened bedroom where she comforts a man battling nightmares. When she wakes in a hospital bed and regains her memory, she assumes the ruggedly handsome Derek was no more than a figment of her concussed mind.

As Cami recovers, she learns that Derek is not only real but also the driver charged with causing her accident. She should be furious with him, but their inexplicable nights together showed her a tender side beneath his rough exterior. Will she let one reckless mistake drive them apart, or will forgiveness have the right of way?

Derek is a man with a temper. It’s not like he beat his ex-wife and daughter but he’s been known to fly off the handle or yell at times – even turn over furniture in a fit. He’s on his way to his daughters softball game and he’s already behind schedule. He doesn’t want to miss any of it but unfortunately traffic is heavy. He makes a move that cuts off a car and ends up witnessing the crash that ensues. He heads off to his daughters game but he can’t seem to get the accident out of his head.

Cami is a young woman who works as a driver during the summers, helping shut ins get to their doctors appointments. She is an extremely cautious driver and never goes on the freeway as she sees it as an accident waiting to happen. When she gets a call from her dispatcher and must get someone to an appointment quickly she gets talked into getting on the freeway to save time rather than taking the back roads as she normally does. When she gets cut off she slams on her brakes which then gets her rear ended and then pushed into yet another lane. It’s a pretty severe crash.

That night Derek is in bed and starts having nightmares. He dreams that he’s the driver in the car crash that he witnessed that day. He continues to have these nightmares night after night – along with another one that has him as a woman who was in a crash and is then trying to save her father from death. He knows he’s dreaming as he doesn’t know any of these people but it’s still extremely disturbing.

Enter Cami. She spends her days in a fog and then when it gets dark she ends up in a bedroom. No one can see her or hear her unless she’s on Derek’s bed. Derek thinks that Cami is a dream (although she doesn’t know she’s Cami as she can’t remember anything about who she is or even if she’s alive or not) but yet he can touch her and feel her. He’s thrilled with DG (dream girl) and they are soon falling quickly in love. DG soothes him while he sleeps but she also helps him realize (without her knowing it) that he was the cause of the accident on the freeway – even though he wasn’t in the accident – and that he needs to do the right thing and turn himself in. The minute he figures this out, DG starts to disappear and doesn’t return to his bedroom. Derek finds out that he will have to go to court for the accident but then he finds out the name of the woman who was in the accident and looks her up on Facebook. He’s shocked to see that DG is that woman. He knows he wants her in his life but he’s not sure he can face her or her family knowing that she’s lying in a hospital because of him.

This was definitely a story that I would put into the “not your normal romance” category. The fact that Cami and Derek fall in love not knowing if she’s dead or alive – a ghost or something else – is a bit on the strange side but the author made it work.

I have to say that I liked Cami a lot. She did end up being kind of two different people when it came down to it. In real life she wasn’t confident nor a seductress, like DG was. She was actually hesitant, easily felt guilt and wasn’t confident at all. It was interesting, once she was out of her coma, to see her remember her experience with Derek and to remember how different she was with him. She realized that she could be that person, if she could let all the guilt go from her past – and work out her issues with her mother and brother.

Derek created such a conundrum in my mind. He obviously needed anger management and eventually understood this on many levels – getting help by the end of the book. Throughout the story we see examples of this but besides the accident it only affected people emotionally. That being said he could be such a nice guy! He loved his daughter and was a good dad. When Derek and DG were together he went out of his way to be kind and considerate – even though he thought she wasn’t real. It really showed that if he worked at it he could beat the anger back and make himself a better person. I liked how the author showed us the different sides of the man and didn’t just show us the anger.

I did have a couple of issues with the book. I didn’t particularly care for the fact that the “I love you’s” happened so quickly. It was only over the course of 4 days that DG appeared in Derek’s house. I guess having Derek not know that she was real – and DG not knowing exactly who and what she was – put a bit of a damper on it all for me. After they were reunited in real life it was better but the time issue didn’t necessarily help overall. The other problem I had was with Cami and her family. She’d felt set apart from them for years because of an accident that she was in with her father (the other dream Derek was having was hers from 8 years prior). Her brother had blamed her for the accident and she felt her mother had as well. In the course of the book the real cause of that accident comes to light and it’s kind of skimmed over and not brought up outside of Derek and Cami. This peeved me a bit as I kind of felt like it shouldn’t have been brought up if it wasn’t going to be dealt with. I understand that it was a mechanism to have Cami recognize that she wasn’t at fault but I found the non-action to be frustrating.

Overall it was a good story. Unquestionably it’s “out there” but in a way that worked for the story. I liked this new-to-me author and am interested in reading more of her work in the future.

This title is self published. You can read it here or here in e-format. This book was provided by the author in exchange for an honest review.

*This book was previously released under the title Road Rage.