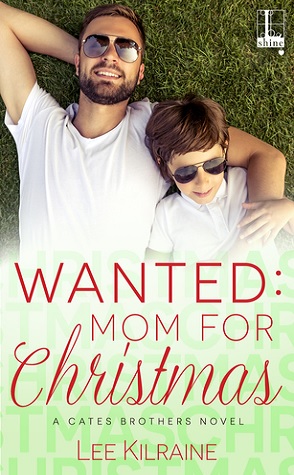 For small-town cop and single dad Hawk Savage, Christmas tends to be more hassle and worry than mistletoe and magic. His daughter, Heather, is ten going on teenager, while his son, Henry Lee, has decided he needs a mommy, ASAP. HL’s constant matchmaking is enough to break a father’s heart, but Hawk has a more immediate problem. His high-school girlfriend, Nora Joy, just arrived on his doorstep, claiming to be his family’s new Rent-A-Mom. He sure didn’t hire her, but he can’t turn Nora’s admittedly shapely tush out on the street.

Sidelined by injury, Olympic medal-winning volleyball player Nora receives a mysterious Rent-A-Mom job offer just when her finances, and her spirits, are at an all-time low. True, she’s not much for cooking. Or housekeeping. Still, it’s hard to resist Hawk’s children…and Hawk himself has changed from the lanky teenager she once knew to a strong, steady, very tempting man.

Christmas in Climax is shaping up to be full of surprises. But the biggest one of all might be the happy-ever-after that a little boy’s Christmas wish can bring…

After Nora finds her boyfriend in bed with her best friend she heads to her mom’s home to talk  things out.  She doesn’t get a whole lot of sympathy and then finds out that her mother has not only spent all of Nora’s money but has put her in great debt as well.  Nora’s not sure she’ll still be able to play volleyball for a living so sets out to find a job for herself.  This proves harder than it looks.  She finally gets an email from someone offering her a job as a Rent-A-Mom.  Nora has no experience and her mother was a horrible role model so of course, she takes the jobs.  Beggars can’t be choosers, right?

Nora heads from California to her hometown of Climax, North Carolina to meet the family she’s going to play mom to.  There’s 7-year-old Henry Lee aka HL and 10-year-old Heather and then there’s their hot father, Hawk.  Nora doesn’t really get a good look at Hawk because when she arrives at the house he’s sick with the flu.  Nora nurses him back to health with the help of the kids and all is well until he is coherent.  He realizes that the Rent-A-Mom is Nora, his girlfriend from 11th grade, and as hot as he thinks she is, he never ordered a Rent-A -Mom.  Events play out so that Hawk and the kids end up inviting Nora to stay until Christmas and this gives them all a chance to get to know each other and worm into each other’s hearts.

This was a very cute novella.  Nora and Hawk’s relationship from high school was sweet and their separation was sad.  I was happy that they got another chance with each other in the end.

Heather and HL were adorable kids who had their own personalities.  HL was outgoing and competitive and Heather was quiet and shy.  The pair were so opposite but they got along well.  Heather was a little leery at first with Nora, as she should be, but HL was all in.  These kids were just wonderful and I loved reading about them breaking out of their previous lives and inviting Nora in.

This was a lovely Christmas story and a complete standalone in the series.  I haven’t read any of the other books in the Cates Brothers series but didn’t feel like I was missing any information.