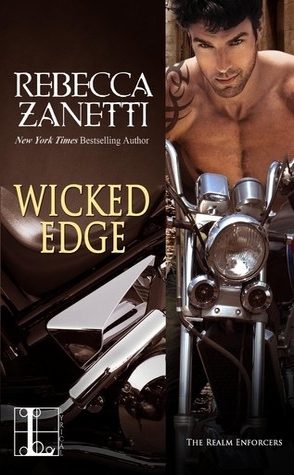 If you loved the Dark Protectors series, these wicked hot Realm Enforcers are for you...

Daire Dunne is more than ready to take a quick break from his duties as a Coven Nine Enforcer. When he spots a sexy blonde across a Titans of Fire party, it’s not long before she’s on the back of his Harley on the fast track to his apartment. Unfortunately, one overheated kiss in, the woman drugs Daire and steals valuable files that can’t fall into enemy hands. The second he comes to, the hunt is on...
Now that Cee Cee Kyllwood has the information to take down an enemy that destroyed her family, she can implement her perfect plan for revenge. Nothing will stop her, not even a shockingly sexy enforcer barging into her life. Not even the spectacular, fire-branding sex engulfing them. But if Daire ever figures out who her family really is, all bets are off...

Daire Dunne doesn’t do many things for himself. No one is more surprised than he is when he picks up a woman at the MC where he is undercover. There is something about her that Daire can’t turn away; something he has never felt before. Then she drugs him and steals very confidential files. The chase is on for Daire isn’t going to rest until he finds her.

Cee Cee Kyllwood is on a mission to destroy the man that killed her husband and mate so long ago. After he died, Cee Cee did what was necessary to protect her three boys. She sacrificed herself in order to protect her children. Now she’s free from the tyrannical demon that kept her captive for years. Cee Cee finally has a chance to avenge her husband. She has no idea what a mistake it was to steal from Daire. Or maybe she does.

Daire has no idea who Cee Cee really is. To his senses, she is an Enhanced human woman, which means she can mate with the supernatural. When he finds out that she is a demon, he is astonished. And angry. Very angry.

I loved Cee Cee/Felicty. I thought her character was so well written. She was singleminded in her pursuit to bring justice to the man that murdered her mate and forced her into captivity. She never stopped trying to get away from Daire. Cee Cee was such a fierce heroine. I loved reading about how Daire and Cee Cee react to each other. Just loved it.

This is my second favorite book in the series. Daire is so straight-laced and rigid. He is very much a rule follower, which is why his attraction to her is so distracting. Their love story was very well written & I enjoyed it immensely. 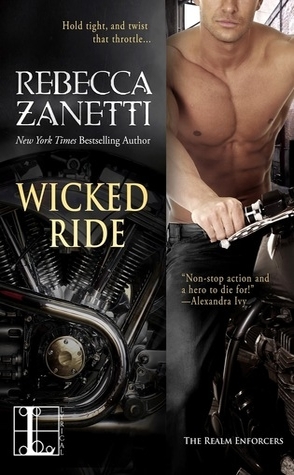 If you love the Dark Protectors, these wicked hot Realm Enforcers are for you!
Alexandra Monzelle is a hard-fighting, heat-packing Seattle vice cop, and she’s not much interested in being protected. Her short skirt and sex-kitten heels are tools to lure her suspects into talking about the deadly new drug hitting the streets. She can take care of herself and then some. Unfortunately, she can’t seem to get that through to Kellach Dunne.
Kellach is a fresh import from Dublin, and he’s landed at the heart of a vicious motorcycle club that deals in guns, narcotics, and mayhem. He’s all male, all rough power—and all interference in her damn investigation. Maybe he’s one of the good guys. Maybe not. Lex knows an affair with an immortal like him would risk everything. No matter how delicious he looks…

Kellach Dunne is in Seattle for one reason. Kellach is an Enforcer for the Coven Nine. It is his responsibility to uncover who is trying to kill his fellow witches. Aside from beheading, the only way to kill a witch is a mineral called planekite. Planekite hasn’t been been mined for hundreds of years. Now someone is using it as a weapon, not just to kill witches but to test on humans.

Alexandra Monzelle is a Seattle vice cop. She has no idea the supernatural even existed. What she does know is that there is a dangerous new drug hitting the streets. Lex sees things in black and white. Kellach Dunne is definitely part of the darkside and she will do whatever it takes to bring him down. Then she finds out who & what he really is.

Kellach is instantly attracted to the pretty cop. He wants her, but she’s not only human, she’s a cop. A cop that is trying to bring down Kellach and the MC he is a member of. Lex doesn’t know that Kellach is undercover. Not until the supernatural world is revealed to her. Lex soon realizes Apollo is far more than a street drug killing people. It’s a drug that could kill Kellach. Lex will do anything to get Apollo off the streets.

I enjoyed Kellach and Lex, though Lex did get to be a little much. She just made decisions that didn’t seem right to me. Running into danger with the supernatural beings she just found out existed? Check. A drug-dealing father that is in prison? Check. I really did like Kellach and the rest of the the Dunne family. Although this isn’t my favorite book in the series (I’ve read them all by now), I thought it was a good start to a really good series.