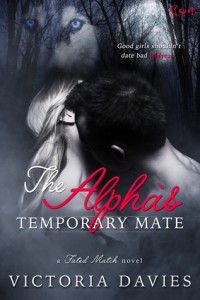 Fated Match has spent centuries pairing supernatural mates together. Witch and matchmaker, Chloe Donovan, takes pride in helping her clients find their happy endings. But when werewolf alpha and millionaire playboy Kieran Clearwater stalks into her office, she may have finally met the one man she can’t help.

Kieran has no intention of finding his mate. Love is a weakness he can’t afford. But with his pack growing more concerned over his single status he, needs to assure them all is well. What better way to do so than to hire a fake girlfriend he can parade around at the annual pack retreat?

Chloe is coerced into becoming the wolf’s temporary mate, but she’s determined to keep their agreement professional. But her seductive partner in crime has other ideas, and his considerable charm makes it difficult for her to keep her eye on the prize. While these two burn hot when they’re together, behind-the-scenes politics work to rip them apart.

Chloe has worked at Fated Match for many years and loves that she gets to put fated pairs together and have a hand in starting a family. She was an orphan herself so families are very important to her. When Kieran Clearwater, the alpha of the Clearwater pack, comes into Fated Match and tells Chloe that he’s looking for a temporary girlfriend she gives him an adamant no. That’s not what they’re there for! Even the owner of the company says no until Kieran flashes a check with a ton of zeroes on it in front of her.

Chloe tries hard to find someone to take the place of Kieran’s fake girlfriend but no one is right for the part – according to Kieran. He decides that Chloe is the one that should play the part and he finally talks her into it. Chloe knows that Kieran is just a playboy so she tries to protect her heart but moving in with him and playing a role that she wants to play in real life just makes her want it that much more. Kieran wants Chloe in his bed but he was once hurt from falling in love so believes that he’s a man that’s not capable of it once again.

This story had a cute premise to it and I have to give it high marks for creativity. The paranormal characters that were involved weren’t all of your average wolf and vampire. There were griffins, succubi and even a siren and necromancer and they brought a different and fun element into the story.

Kieran’s request for a temporary girlfriend was a bit far-fetched but was explained in more detail later in the book. Had it been explained that way earlier it would been appreciated. Of course he was supposedly this great playboy but we saw no evidence of that except from pictures that Chloe found online. He wasn’t too deep of a character, unfortunately, and that put a bit of a damper on my overall enjoyment of the book.

Chloe was a fun and energetic character. I liked her inner strength and hearing what she had lived through throughout her life – and come out with flying colors – made me like her that much more. I didn’t care for her giving up near the end of the book but she quickly made up for that in the end.

Overall it was a fun book with a few sexy times thrown in. It was a quick read as well so if you’re looking for something light with a bit of the paranormal involved then this one is perfect.