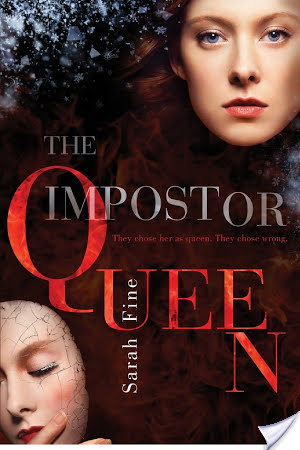 Sixteen-year-old Elli was a small child when the Elders of Kupari chose her to succeed the Valtia, the queen who wields infinitely powerful ice and fire magic. Since then, Elli has lived in the temple, surrounded by luxury and tutored by magical priests, as she prepares for the day when the Valtia perishes and the magic finds a new home in her. Elli is destined to be the most powerful Valtia to ever rule.

But when the queen dies defending the kingdom from invading warriors, the magic doesn’t enter Elli. It’s nowhere to be found.

Disgraced, Elli flees to the outlands, the home of banished criminals—some who would love to see the temple burn with all its priests inside. As she finds her footing in this new world, Elli uncovers devastating new information about the Kupari magic, those who wield it, and the prophecy that foretold her destiny. Torn between the love she has for her people and her growing loyalty to the banished, Elli struggles to understand the true role she was meant to play. But as war looms, she must align with the right side—before the kingdom and its magic are completely destroyed.

I absolutely loved this book. It was such an engaging fantasy. The world was fascinating, the magic was awesome, the characters were great, the plot was engaging. The only thing I didn’t like about it was the main character, and she was more ‘eh’ than actual ‘dislike.’

The story follows Elli as she moves from (forcibly) pampered princess to outcast, and it’s very well handled. Probably because Elli was kicked out after they discovered she didn’t have magic, rather than her running away. That allowed to her to have this genuine, deep-seated devotion to her country and a desire to do best, and when she found herself living in a shack in a cave and working hard for the first time in her life (or working at all for the first time!) she had that drive and motivation to prove/improve herself to keep her going. I really liked that about her. What I didn’t like was the way she seemed really, really young in some parts. Honestly, when the book started, I thought she was supposed to be eight or so. (She got better. Sorta.) I also didn’t like how, when she did discover her unique powers, instead of doing literally anything with them she just sort of flailed around and let them control her. She had most of winter to experiment, and she didn’t get proactive until the last few chapters. It didn’t seem to fit with the rest of personality, which was very intent on learning how to be ‘useful’ in every single other way except magic.

Also, she was thoroughly bisexual, so that was awesome.

I liked the world in this book, which had magic, culture, and geography all intertwined into one awesome whole. Secret sects! Wars! HISTORY! Bizarre inheritance rituals! I loved how well it all came together. The plot was rather introspective and focused a lot on the characters and the world, until the action at the very end, but I was interested enough in said characters and world that I didn’t really care. Mostly because the world was the unique part of the book, and when the action did happen it was kind of predictable. (I have a theory, one which I’m pretty sure is correct, there were some glaring hints, but I’m going to have to wait until the sequel to be proven right. Sigh.)

All in all, a solid YA fantasy that I would recommend to any fan of the genre.