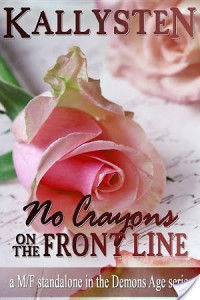 When Samuel gets his class of elementary students to write letters to soldiers fighting on the demon invasion front line, the children coax him into doing the same. Lieutenant Williams soon answers his letter, and it’s only the beginning of a long exchange of thoughts, anecdotes and feelings. This long-distance relationship is bound to change when they meet in person… Will they each be true to what they showed through their words?

Samuel is an elementary school teacher and encourages his students every year to write to soldiers who are fighting in the war against the demons. This particular year his students encouraged him to write one as well and it landed in the hands of Lt. Angel Williams. Lt. Williams writes back and that begins a lovely conversation that soon becomes friendship. When Angel finally tells Samuel in a roundabout way that she is actually a she things get tense as Angel believes that Samuel has ulterior motives. Samuel manages to calm Angel down and while they remain friends for a while they are soon in a deep relationship unlike either have had before.

The story is told strictly through letters sent back and forth and even though Samuel and Angel meet a couple of times during the course of the story we are only privy to letters sent before or after the fact. The couple gives each other strength and hope for their future of both their world and their lives together. It was a very sweet story and if you like epistolary novels then I think you’ll like this one. Angel and Samuel are both intelligent and well-read and that comes through in their letter writing. I loved reading about their lives and the relationship that grows between them.

I have only read one other book set in The Demons Age series and that was Anterograde which was an m/m story and really great. This is part of that series but definitely can be read as a stand-alone novella. When Calden wakes up – every time he wakes up – the last thing he can recall is a debilitating headache that even his medical background failed to identify as anything more serious than a regular headache. He also remembers his decision to ignore the fact that his best friend Eli is married and to tell him about his long-standing feelings for him. He remembers June second.

But it is not June second anymore. The tattoos on his arm and chest prove it. They also tell him why he doesn’t remember anything past June second… and why Eli sleeps in his bed now.

When Calden wakes up – every time he wakes up – he gets to discover Eli is in love with him for the first time all over again.

His best friend, Eli, is there to help him through it all and eventually Eli and Calden become a couple but of course Calden can’t remember this and discovers it daily that his best friend has become his lover/partner. The story follows both Eli and Calden as they work through their everyday lives dealing with Calden’s amnesia and their life in general.

The story is definitely a different kind of romance. Calden is a man who is plagued with guilt over the death of his sister. When he stays awake for too long he starts to hallucinate that his sister is there and she’s pouring on the guilt about her death and how he couldn’t save her. If she was actually there she would never have considered Calden responsible for her death.

It was an interesting love story as only Eli can remember what happens from day to day. Yes, Calden writes things down in a journal but not much about Eli per Eli’s request. Even though Calden couldn’t remember it was still all very sweet. The other interesting part of the story was the way it was laid out. It is told in alternating POV’s but the timeline has one character working a backward timeline and one character working a forward timeline. The author does give the reader the option to read the story in chronological order but recommends it be read the chapters in the order they were meant to be discovered. It definitely made for a different feel to the book.

The one thing that kind of annoyed me about the book was the world that it was all set in. They lived in a walled city and they had been at war for years with strange creatures that had been nicknamed demons. Throughout the story I couldn’t quite figure out why that part of the story needed to be included. Yes, it explained the lack of doctors and the need for Calden to be included despite his amnesia (he of course hadn’t forgotten any of his medical schooling) and the reason his sister died but that could have easily been explained by a normal war. Why demons? I couldn’t figure it out and I found it to be bit annoying as I found it unnecessary.

Anyway, despite the whole demon thing that I disliked, the rest of the story was very good. A different type of romance/love story but worth reading, imho.